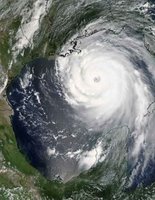 The 2006 hurricane season officially begins in only nine days and meteorolists are predicting that it will be a humdinger. although not as calamitous as last year's record season.

The National Oceanic and Atmospheric Administration said Monday that:

There will likely be 13 to 16 named storms, compared with an average of 11 named storms in an active season.

Eight to 10 of these storms will become hurricanes, compared with an average of six.

Four to six of the hurricanes will reach an intensity of at least Catagory 3 with sustained winds of at least 115 miles per house (178 kmh), compared with an average of two.

One hurricane hitting where you live is enough to make it a bad season.

TRAPPED IN THE RINSE CYCLE
NOAA said that 2006 will be the ninth year of a cycle of intense hurricane activity that began in 1995.

Warmer than usual tropical waters and favorable wind patterns were responsible for last year's record crop of 28 named hurricanes. Waters this year are cooler, but still warmer than usual, but in the long run the number and intensity of major storms will depend on smaller-scale weather patterns that cannot be predicted in advance.

Some scientists says that global warming may be playing a role in increasing the power of hurricanes and believe this trend will continue.

READY OR NOT
No event better captured the hubris and ineptness of the Bush presidency than the federal response to the suffering of Hurricane Katrina's victims.

Because the president took a battering in public-opinion polls, one would think that an extraordinary effort has been made in the eight months since Katrina to repair the literal and figurative damage that cataclysm caused.

* The Federal Emergency Management Agency (FEMA), the bastard child of the Department of Homeland Security (sic), remains the first-line of defense and the leading responder for large-scale disasters.

Yet the Bush adminstration has done such a good job of destroying FEMA, a notably effective agency during the Clinton years, that it couldn't find a replacement for the disgraced Michael "You're Doing a Heck of a Job, Brownie" Brown, despite a nationwide search for a new director.

The reason: None of the prospective replacements, who were a Who's Who of the best disaster response experts, believed that the White House was serious about fixing FEMA.

A bipartisan Senate panel agreed and said that FEMA is beyond repair and should be abolished.

Will be a referendum on the Department of Homeland Security when it comes to storm response.

* Most of the major breaches in the New Orleans levee system during Katrina were caused by flaws in design, construction and maintenance, and parts of the system could still be dangerous even after the current round of repairs by the Army Corps of Engineers, according to an independent report published yesterday.

Said Raymond B. Seed, a professor of engineering at UCal Berkeley and chief author of the report.

Not surprisingly, the Corps' own report, due out on the opening day of hurricane season, soft soaps the whole mess by blaming unanticipated design flaws and notes that some places were simply overwhelmed.

My own suggestion would be to abolish to Corps and resurrect FEMA.

AND NOW A WORD FROM OUR SPONSOR
I have a friend who is currently immersed in handicapping (as in horses) and Roman and Greek history who takes a rather cosmic view of the ebb and flow of affairs when he's not at the track.

I don't mean to depress anybody, but Our Father has a trick up His sleeve known as the Four Elements, and we may have no doubts that Katrina was only one with three to go.

So an American city was destroyed by water, another will be destroyed by fire, another by earth and another by air -- not necessarily in that order -- but it will definitely happen and these events will be equal in magnitude and time paced between each one.

Uh . . . you read it here first.
Posted by Shaun Mullen at 4:22 AM
Email ThisBlogThis!Share to TwitterShare to FacebookShare to Pinterest

"My own suggestion would be to abolish to Corps and resurrect FEMA."