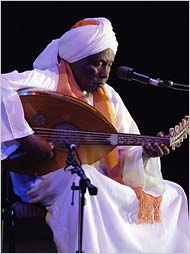 It was a spring evening in 1978 at the old Capitol Theater in Passaic, New Jersey, and we had been tipped that there would be a special guest appearing with the Grateful Dead. The house lights dimmed to darkness. A few minutes of silence and then the most extraordinary sounds arose.

We didn't know what kind of instrument was making this swirlingly hypnotic music, let alone who was playing it and singing in a strangely accented voice until the stage lights slowly came up, revealing a dark-skinned man wrapped from head to toe in white with what looked like a lute across his lap.

As we learned later as the man finished and was introduced by Dead percussionist Mickey Hart, he was Hamza El Din, the Egyptian oud player and composer.

El Din, who died this week in Berkeley, California at age 76, was a master of the oud, a six-stringed lute and almost single handedly reinvented the musical culture of Nubia.

El Din performed at the Newport Folk Festival in 1964 before moving to the San Francisco Bay Area. He released several albums, including one produced by Hart, and his music was used for movie soundtracks and dance pieces by several ballet companies. He also collaborated with the Kronos Quarter and helped arrange for the Dead to perform at the Great Pyramids in Gaza, Egypt, in 1978.

Posted by Shaun Mullen at 2:56 AM
Email ThisBlogThis!Share to TwitterShare to FacebookShare to Pinterest