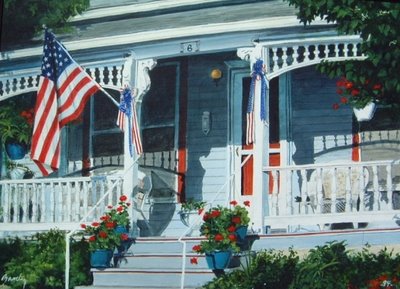 It is Memorial Day today in the U.S.

As always, I've hung an American flag outside of Kiko's House this Memorial Day.

As always, I will keep the day as uncluttered as possible. I'll probably watch some baseball, but there will be no shopping or surfing the Net.

As always, I will remember that freedom of speech is not protected by journalists like myself but by the men and women who gave their lives to defend American values.

As always, I will feel a sadness over loved ones and friends who will not be celebrating this Memorial Day because of their sacrifices. Nick Tuke. Chuck Callanan. Jim Mullen. Mike Tames. Bob Layton.

But this Memorial Day is different. Besides being sad, I also am angry -- a slow boil, if you will -- over the mess that we've made of our great country.

I say we because this has been too big a job for even King George and his court, although they've tried hard.

As my cousin County Bumpkin is fond of saying, dissent and bickering are the soundtrack of a democracy. But this should be a golden age for America and it is anything but. I cannot recall a time when so few have so much and so many are struggling. When we are so incapable of a national consensus on anything beyond the view that our government and too many of our institutions have failed us. That things will get worse before they get better, if they do get better.

Such pessimism is uncharacteristic of me, let alone Americans in general, and I feel a twinge of shame that I don't feel more upbeat this Memorial Day. But my glass is well below half empty, especially when it comes to the sacrifices today's men and women at arms are being asked to make.

Sacrifices for what? A hypocritical, ill focused and foundering war on Islamic terrorism? The mess in Mesopotamia? The underresourced and unfinished war in Afghanistran? Preparing for a future war against Iran? You tell me.

-- Love and Peace, SHAUN
Posted by Shaun Mullen at 1:13 AM
Email ThisBlogThis!Share to TwitterShare to FacebookShare to Pinterest

When next you feel depressed Shaun, remember what it would be like to live in North Korea, or Syria, or "Palestine", or Darfur, or Nigeria...

As the song (by Fred Dagg, aka John Clarke), says: "we don't know how lucky we are."

And Victor Hanson might jusr be right. Be glad that he too is doing ahat you're attempting — providing balance.