Science Saturday I: The Warrior Princess 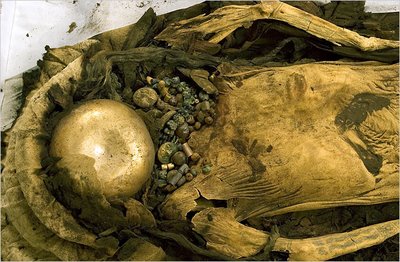 Was She a Warrior Princess? (Photo: Ira Block/National Geographic)
The woman died 1,600 years ago in the heyday of the Moche culture, well before the rise of the Incas of Peru. Her tomb suggests someone of high status and mummified remains are covered with red pigment and bear tattoos of patterns and mythological figures.

She was surrounded by weaving materials and needles, befitting a woman, but also two ceremonial war clubs and 28 spear throwers — sticks that propel spears with far greater force. Such items have never been found before in the burial of a woman of the Moche, indicating that she might have been a warrior princess or perhaps a ruler.

The Moche culture flourished in the coastal valleys of northern Peru in the first 700 years A.D. The people were master artisans and built huge adobe pyramids. The woman's tomb was near the summit of a pyramid called Huaca Cao Viejo, a cathedral of the Moche religion.

The New York Times reports that X-ray examination revealed that the mummy was a young adult. Lying near her was the skeleton of another young woman who was apparently sacrificed by strangulation with a hemp rope, which was still around her neck. Such sacrifices were common in Andean cultures.

Radiocarbon analysis of the rope indicated that the burial occurred around A.D. 450.

The National Geographic Society announced the discovery and is publishing details in its magazine's June issue.
Posted by Shaun Mullen at 4:50 AM
Email ThisBlogThis!Share to TwitterShare to FacebookShare to Pinterest