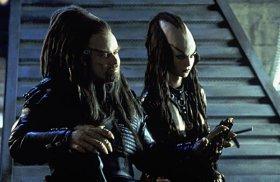 Earth ends with a whimper, not a bang. Blame John Travolta.
Talk about big fun!

We got over 130 nominees for the Worst Movies of All Time, not bad for a small blog, and boy were there ever some clunkers.

As you would expect given the Kiko's House demographic, whatever the heck it is, almost all of the movies were released in the last 25 years, which is kinda unfortunate because as a group movies from the 1950s were certainly the most banal, if not the worst as a group, in my movie watching lifetime.

FIRST, SOME UNTELLECTUAL OBSERVATIONS
There was spirited discussion around Kiko's House about what constitutes a bad movie.

Well, it's a movie that's bad. Du-uh. But that can take rather different forms.

At the top end, there are movies like "Ishtar" (1987). It cost a fortune to make, is bad despite great actors, great director, great cinematography and a story line that had promise because you came away from it feeling like you just spent five hours watching Dustin Hoffman and Warren Beatty do nothing but eat sand. Okay, so it was only two hours.

At the bottom end are low budget movies like "Attack of the Killer Tomatoes" (1980), which tried to be campy but wasn't. It was just plain bad bad.

Speaking of killer tomatoes, there were a slew of horror films on the list. Howcum?

Rabid grandmothers, giant snakes, hot rod pursuing ghosts and just about anything from outer space tends to provoke laughs rather than screams. And no matter the moster or villian, most horror films have a certain sameness. Besides which, cinematic elitist zombies like myself need to have movies to look down on.

Remakes, adaptations and sequels didn't fare well, or prequels in the case of "Batman Begins" (2005).

"The Beverly Hillbillies" (1993) and "Car 54, Where Are You?" (1994) were criminally unfunny compared to the genuinely funny TV sitcoms on which they were based. I usually love John Goodman, but hated him in and everything about "Blues Brothers 2000," which actually bombed in 1997.

"Star Trek V: The Final Frontier" (1989) and "Star Wars: The Phantom Menace" (1999) got zapped because they took themselves way too seriously, while I suspect that the remake of "Psycho" (1998) got slashed for a couple of reasons: Although it had no pretensions, it sucked anyway, and Hitchcock's original "Psycho" (1960) was so masterful that any remake was bound to suffer by comparison.

Other adaptations got dissed because, as Kiko's House visitor DaveMinnj put it

There's a great novel, play or story that could be a great movie if the director had some balls but instead is turned into mush because there are no villains really.

Among his nominees in that spirit -- or lack of spirit -- was "Cat on a Hot Tin Roof," which has been a darling of the critics since its 1958 release.

Taste, of course, is in the eyes of the beholder, but I took issue with two of the picks on the list.

I thought that "Moulin Rouge" (2001) didn't try to be anything other than what it was -- a big candy apple of a movie -- but a couple of voters thought otherwise. And I liked "Mars Attacks" (1996) because it was so bad. (Okay, I also have a thing for Annette Benning.)

Note also that critics and moviegoers are often far apart in matters of taste. Two movies that made the list are doing or did quite well, thank you:

"The Da Vinci Code" (2006), which has gotten less than stellar reviews, has accomplished the rare feat of outrunning its hype.

While a goodly number of the movies on the list are available on VHS and DVD, the golden age of the televised movie is long gone. Boo hoo.

In the U.S. and some overseas cable markets, a great exception is Turner Classic Movies (TCM), a no-advertising cable channel that is without peer. The Sundance Channel is pretty good, too.

American Movie Channel (AMC) used to be decent until it was ruined by commercials, while I don't watch HBO, Showtime or other so-called premium movie channels because I'm not going to pay more to my already userous cable company to watch the same half dozen movies over and over. And over.

My goodness, what a list. I can't believe there's no Beastmaster on it, which is my personal "worst movie." I think they made a sequel, but I've never seen it, or surely that would be on the list as well. The English Patient is another on my worst list, but I think that's more a personal thing.

How dare Howard the Duck make this list? This was truly a "sooooo bad it's good" movie just like Buckaroo Bonzai!

Well, I thought "The Duck" was too far beyond bad to be bad good.

Meanwhile, I share the surprise of the fella who expected to see "The English Patient" on the list. Like "Ishtar," it seemed to have everything going for it but was incredibly boring.

Why is Batman Begins on the also rans? And why is Snatch in the second runners up category? I really like both of those and they don't belong anywhere near a worst list. And on that note, where's Batman and Robin at? It's one of the most truly atrocious movies of all time.

Agreed that Batman & Robin should be on the list. There's nothing nice I can say about it, so I won't say anything at all. One vote for Marci X, which only stayed in theatres for 2 seconds. Damon Waynes and Lisa Kudrow should be doing community service to offset that one.

I've never seen Ishtar, but I'd be willing to give it a try. There are few movies I opt to flat out not see, and those are mostly the slasher types, such as "Saw".

I found The English Patient an odd one, because although I was not exactly bored while the movie was playing, I felt very flat after it was over, or like the last two hours were "missing". But I also had no sympathy for the Fiennes and Thomas characters so I'm sure that contributed.

I forgot another -- Tom Jones. One of the few films I walked out on.

In defense of Buckaroo Banzai (and this is why these lists are fun), I don't think it's in the league of "Howard the Duck." It's much better.

Actually I see BB as more like "Tremors." A goofy B-movie with a decent cast that looked like they were having fun and not taking it too seriously. BB is one of my favorites.

CapsFan6's mention of walking out on "Tom Jones" resonates with me depending on when he walked out on it.

When I saw "Tom Jones" in re-release in the late 1960s, I thought it was a delightfully bawdy romp. But when I saw it nearly 40 years later (ouch!) on DVD it was incredibly boring, as wel as indication if there ever was one that the way sex sold back then is incredibly passé today.

I saw Tom Jones in college, one of the student activity council films (at Lehigh University in PA). I don't know why they showed it, most of the movies were more current, but it was there, and my friends and I tended to go to just about every movie. $2 was a great deal!

I don't know how long I was in there, time-wise -- maybe halfway through? -- but I walked out during/just after the scene where Tom Jones (Albert Finney) and a woman (a prostitute?) were ogling each other over a meal.

Obviously, this was a metaphorical sex scene, and I knew it. But the way they were eating -- tearing off bits, pieces falling out of their mouths -- totally grossed me out. Until then I was just bored, but after that, no way could I stay.

The only other film I recall walking out of was again, at college. This one was "Pet Sematary," based on the Stephen King novel. I walked out not because it was bad, but because I simply could not take the continual build up and release of tension. Seriously, I couldn't. I think I walked out not 15 minutes into the movie, during King's cameo as a priest.

I have to agree here. The fact that Batman Begins is on this list, while Batman & Robin *isn't*, is complete insanity.

I know lists are supposed to create controversey, but seriously Batman Begins and not Batman and Robin. Please!

The porpoise, er . . . purpose of the list was not to create controversy. Please!

Snatch is one of my favorite movies.

What is snatch doing on this list? And Batman Begins and not Batman and Robin (the only movie I've walked out of...leaving in the first 5 min)?

This is the umpteenth list of bad movies I've looked at. I am just completely baffled at how Joe vs. the Volcano keeps slipping by. I haven't seen it on a single list. It is stunningly bad. Just bad bad bad and awful. WAY worse that 1/2 the movies on everyone's list. Oh well.

I disagree strongly with Snatch, Armageddon, and Batman Begins.. It is a slap in the face to have any Star Wars movie on here, also.. as the Star Wars series may be the best series of movies of all time competing with The Godfather and Indiana Jones.. please add The Cookout and Soul Plane

Candy (1968) is by far the worst movie ever made. It is totally unwatchable. It received terrible reviews upon its release, and the movie has hardly aged well.

I have seen many bad films, and this one by far takes the cake.

OK its alright, but where is house of 1000 corpes. And another thing how the HELL did revenge of the sith wind up on there.
please write back.