Auto Motives: My Kingdom For a DB56 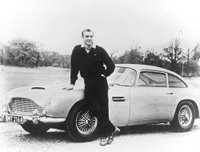 I am of a certain age and gender to have been bowled over by the beyond gorgeous gray Aston Martin DB5 piloted by Sean Connery in the first several James Bond movies. I actually got to sit in the beast in the showroom of a local Pontiac dealer (huh?) during a mid-1960s promotional tour. (That's me in the photograph. Not.)

It didn't take a whole lot of testosterone to imagine hurting down a motorway with the pedal to the DB5's metal, but I've recently been brought up short by Samantha St. James, who drove -- or rather tried to drive -- one of the beasts at the Aston Martin factory in England.

The DB5’s massive steering wheel is there for a reason; I practically had to climb up its wooden sides to get enough leverage to turn the beast. Everything about driving the car was difficult: brakes, gearbox, visibility, radio, the lot.

This is the point where I’m supposed to say that suddenly everything gelled. That the DB5 and I got into a groove and all was right with the world. In truth, the Aston’s skinny-tyred handling scared me to death, and I was not prepared to put the time in to make friends with the world’s most beautiful truck. I couldn’t wait to stop driving.

St. James reports on the experience for The Truth About Cars. It's a great read, and includes the thrilling news that Aston Martin will build you a brand new DB5 for . . . well, if you have to ask about the price, you can't afford it.

General Motors Corp. has announced that it will stop making the Hummer H1, the gas-guzzling status symbol of all that is wrong with the beleaguered automaker.

Since taking over the Hummer name in 2000, GM has introduced the still hefty H2 and a midsize H3 sport utility vehicle.

The H1 gets about 10 miles per gallon, but a GM spokesman said rising gas prices didn't factor into the decision since its buyers typically have been less sensitive about gas prices than most other drivers.

"It's really one of those over-the-top vehicles," auto analyst Erich Merkle said. "It doesn't really have much of a place in everyday society. You can't put it in the parking ramps. Parking spaces can't accommodate it."

The H1 attracted well-heeled drivers looking for a military-style vehicle with an intimidating stance. For the 2006 model year, the H1 was offered as a high-performance H1 Alpha that costs about $130,000 to $140,000.

The vehicle first was marketed to the public as the Hummer in 1992 by AM General, which also makes the military version.

Posted by Shaun Mullen at 3:26 AM
Email ThisBlogThis!Share to TwitterShare to FacebookShare to Pinterest