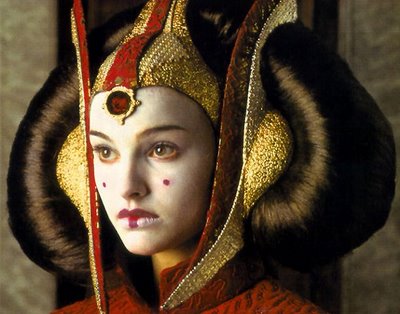 Queen Amidala in "The Phantom Mess" (1999)
Visitors to Kiko's House had a blast sharing their Worst Songs of All Time a while back, so in an effort to again leaven our loaf with something having nothing to do with King George or Armageddon America, let's hear your picks for the Worst Movies of All Time.

The popcorn is on us.
Posted by Shaun Mullen at 4:31 PM
Email ThisBlogThis!Share to TwitterShare to FacebookShare to Pinterest

i always kind of liked ishtar-people understandably had high expectations of it because of the people involved and it never,ever, recovered from the disappointment.
but as a shaggy-dog tale, i think it has an amiable charm. (sort of
like a dumb,big,wet dog with a wagging tail.)

i also sorta liked police academy when i saw it on tv. but then, i also liked porky's.

as far as worst movies, totally inept silly movies don't really bother me. there are so many of them.

what makes me crazy is when there's
a great novel, play, story that could be a great movie if the director had some balls but instead is turned into mush because there are no villains,really.
in that spirit:
"jefferson in paris"
"big trouble"
"thank you for smoking"
"cat on a hot tin roof"