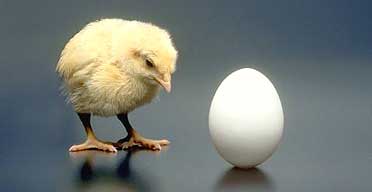 An expert panel made up of a British philosopher, geneticist and chicken farmer has finally answered which came first, the chicken or the egg.

They say that it's the egg.

The Guardian has more here.
Posted by Shaun Mullen at 3:39 AM
Email ThisBlogThis!Share to TwitterShare to FacebookShare to Pinterest

Finally! I can sleep at night now ;)