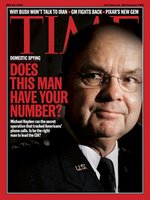 Verizon, AT&T and BellSouth, the telecom giants that were paid off by the National Security Agency to help it spy on Americans, face billions of dollars in damages from their customers now that the full extent of the program has been revealed.

A federal lawsuit filed in Manhattan against Verizon seeks $50 billion in civil damages on behalf of its customers, who happen to include Yours Truly, and more litigation is sure to come.

I have some sympathy for the telecoms.

The NSA said "help us" after three planes had just been flown into the World Trade Center and Pentagon and a fourth was headed for the U.S. Capitol until it was diverted and ditched in a western Pennsylvania field. America was under attack.

Fair enough, but that was four and a half years ago. Didn't it eventually occur to the telecoms' lawyers that this deal was legally suspect? That it's not okay to help Big Brother to, in effect, break into the homes of millions of ordinary Americans and steal their address books? That their contractual obligation is to provide telephone service, not narc for a spy agency?

Qwest, a fourth telecom, saw things quite differently. A lawyer for then-Qwest CEO Joseph Naccio put it this way:

Mr. Nacchio made inquiry as to whether a warrant or other legal process had been secured in support of that request. When he learned that no such authority had been granted, and that there was a disinclination on the part of the authorities to use any legal process, [he concluded] that the requests violated federal privacy requirements and issued instructions to refuse to comply.

When all is said and done, it matters not a whit that Qwest may have been more interested in covering its own butt than its subscribers'. It had the cojones to say no. At least its customers have a modest buffer between their private lives and the Bush administration's Orwellian dystopia.

I already know what I'm going to buy when Verizon gets around to paying me and its other aggrieved customers: An American flag.
How about you?
Posted by Shaun Mullen at 12:15 AM
Email ThisBlogThis!Share to TwitterShare to FacebookShare to Pinterest

I'll buy a pack of my favorite bubble gum.

It will be interesting to see how many people will switch to Qwest as a result of this.

I don't have any of the carriers, so I guess I won't get to buy anything... but maybe just for solidarity, I'll buy myself a walkie talkie.

Can I have a pony?

I'm thinking of donating it to my local Democratic candidate's campaign, or maybe the ACLU.

Here's some gum for you, Marty. It makes a nice gift, too :)

I think I'll buy a T-shirt.