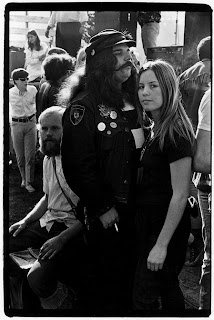 I'm not a superstitious guy by nature, but how can I not help but believe that there was a Curse of the Grateful Dead Keyboardists?

Four of the Dead's six keyboard players died of causes other than stage fright: Vince Welnick, a 2006 suicide; Keith Godchaux, a heroin addict who died in a 1980 car crash; Brent Mydland, who succumbed to a drug overdose in 1990, and Ronald "Pigpen" McKernan, whose liver packed in 35 years ago today at the tender age of 27.

McKernan was on board from the beginning, a member of all of the Grateful Dead's precursor bands and the titular lead singer for eight or so years as the ensemble moved beyond its folk and bluegrass roots and coalesced around psychedelic drugs and the extended riffing for which it became legendary.

McKernan had a rough, often off-key voice and was a mediocre piano and organ player, but he packed more soul and attitude into the Dead than the rest of the band put together. And while he was the roughest-edged player in this eclectic menagerie he was nevertheless the gentle soul who brought the band and their rapt fans back to earth from their cosmic voyage at night's end.
* * * * *

Born in and the son of a San Francisco Bay Area boogie-woogie piano player and R&B and blues disc jockey, McKernan grew up with blacks and had an early connection to their music and culture. He was drinking heavily and had copped a greaser-biker image by his mid-teens and by mutual agreement left.

In 1961, McKernan met Grateful Dead leader Jerry Garcia at the Boar's Head, a loft over a San Carlos bookstore. He was 16. Garcia, three years older and a multi-instrumentalist who couldn't sing a lick, was impressed with McKernan's blues chops and invited him to sit in at the various Bay Area gigs where the first Dead precursor band, the Zodiacs, played.

Writes Dennis McNally in the definitive A Long Strange Trip: The History of the Grateful Dead:

"By the time he showed up at the Boar's Head . . . he had left white middle-class life entirely behind. His first nickname was 'Rimms,' as in the rim of a wheel, like steel. He had a motorcycle chain permanently bolted to his wrist and wore oily jeans, Brandoesque T-shirts, and greasy hair. He was never violent or mean, but the ugly boil on his cheek seemed to at least one friend to be a sensitive disfigured artist figure, like the Phantom of the Opera."

Rhythm guitarist-vocalist Bob Weir was added as the Zodiacs became Mother McCree's Uptown Jug Champions, then a band called The Warlocks and finally the Grateful Dead with bassist Phil Lesh and later drummer-percussionists Bill Kreutzmann (who once tried to pick up my girlfriend backstage at a concert) and Mickey Hart on board.

It was McKernan who persuaded the Dead to go electric in 1965, about the time most band members began taking LSD and its psychedelic jam-band persona was born, But Pigpen stuck to Thunderbird wine and Southern Comfort while adding signature high-energy soul cover songs to the Dead's repertoire like "Turn On Your Lovelight," the Bobby Womack hit, and Wilson Pickett's classic "In the Midnight Hour."

The Dead's head-first dive into the psychedelic pool was a turn-off for some Bay Area musicians, notably Janis Joplin, but it isn't surprising that while she eschewed the Dead she adored McKernan and they became fast friends.

McNally writes that with McKernan the Dead were in effect two bands:

"There was the elite jazz fusion ensemble that could play 'Dark Star' for half an hour with hardly a vocal, bouncing off planets in space, dodging or causing cosmic storms in the heavenly spheres of 'St. Stephen,' going out past Pluto for a lengthy foray into eleven-beat vibrations in 'The Eleven,' then gracefully bringing the gleaming titanium spaceship in for a landing. And out of the hatch would step Mr. Funk himself, Pigpen . . . who could now bring everyone onto solid ground with "Turn On Your Lovelight."

Tom Constanten, an avante-garde pianist, joined the Dead in 1968 in part because McKernan was missing rehearsals and the occasional gig. Pigpen was relegated to the ignominy of playing congas until 1970 when he resumed playing keyboards after Constanten, who was never a good fit, left the band.

In August 1971, McKernan’s heavy drinking caught up to him and he was hospitalized for liver problems. Keith Godchaux was hired to replace McKernan on piano, although he briefly rejoined the band in early 1972 for its famous ’72 tour. His last gig was at the Hollywood Bowl in on June 17 of that year.

The Dead were notoriously terrible at group decision making, especially when it came to firing a band member. (How else to explain why beyond mediocre vocalist Donna Jean Godchaux, Keith Godchaux's wife, sang with them for so many years and only left when Keith was gently shown the door because his drugging had become so bad that he would nod out over his keyboards.)

"A sympathetic critic once remarked that it was generosity of spirit that made the Dead unable to throw [McKernan] out, that the band was ineffably magical without him. But this era of Grateful Dead music was at a profound peak in its evolution in part because Pigpen could close a show like nobody's business.

Pigpen, wrote legendary music critic Ralph Gleason, took "Lovelight" one night and "made it into a one-man blues project. He sang for almost twenty minutes, stabbing the phrases out into the crowd like a preacher, using the words to riff like a big band, building to climax after climax, coming down in a release and soaring up again."