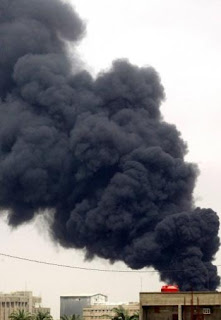 Now that the fog around the battle for and uptick in violence elsewhere in is lifting a bit, we can conclude that:

* The Pentagon's spin that the bloodshed is a consequence of the "success" of the Surge would seem to be silly on its face, but it isn’t.

* This is because the violence is the result of a carefully planned Al-Maliki government offensive to destroy the prime minister's Shiite opponents in the advance of provincial elections in October.

This is especially important in , the major city in oil-rich southeastern where government-militia clashes (photo) are in their third day, because it has been controlled by loyalists of radical anti-American Shiite cleric Moqtada Al-Sadr since the British cut and run.

Since Tuesday, clashes in Basra and throughout Iraq's Shiite heartland have left more than 100 dead and many wounded in Basra, Baghdad, Hilla, Kut, Karbala and Diwaniya.

This state of affairs yet again puts the Bush administration in the position of backing the wrong horse, as Eric Martin puts it, but I don't think there are any "right" horses because political fault lines, even within sectarian interest groups, run so deep.

And while the militiamen are lightly armed, they are highly motivated. There would be no amount of Pentagon spin to explain away an end to Al-Sadr's seven-month-old ceasefire against U.S. troops since the Surge was supposed to give Al-Maliki the breathing room to bring warring parties together, not an opportunity to crush his opponents with U.S. troops and air support.

Then there is a biggest reason why there will be a major American presence in Iraq indefinitely: Oil.

Saboteurs blew up one of Iraq's two main oil pipelines near Basra today, severely reducing exports and pushing the price of crude up by more than a dollar a barrel.

In another by-product of the success of the Surge, the Iraqi government spokesman for the Baghdad security plan has been kidnapped and his three bodyguards killed.

Posted by Shaun Mullen at 10:42 AM
Email ThisBlogThis!Share to TwitterShare to FacebookShare to Pinterest