Court of the Last Resort, My Ass 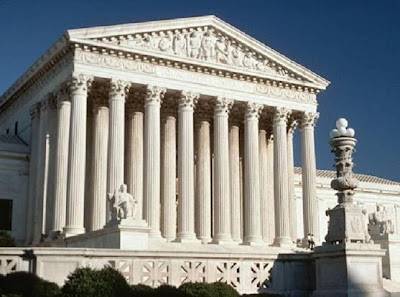 Once upon a time, when it came to the excesses of big business the U.S. Supreme Court was seen as the court of the last resort for the little guy.

But just as the Bush administration has set about methodically immunizing corporations who make killer medical devices, defense contractors who kill Iraqis, telecoms who let the government spy on its customers and financial institutions who made a killing before becoming infected in the FTD epidemic, the Supreme Court has become fawningly business friendly and is now integral to that process.

"A generation ago, progressive and consumer groups petitioning the court could count on favorable majority opinions written by justices who viewed big business with skepticism — or even outright prejudice. An economic populist like William O. Douglas, the former New Deal crusader who served on the court from 1939 to 1975, once unapologetically announced that he was ready to bend the law in favor of the environment and against the corporations.

Today, however, there are no economic populists on the court, even on the liberal wing. And ever since John Roberts was appointed chief justice in 2005, the court has seemed only more receptive to business concerns. Forty percent of the cases the court heard last term involved business interests, up from around 30 percent in recent years. While the Rehnquist Court heard less than one antitrust decision a year, on average, between 1988 and 2003, the Roberts Court has heard seven in its first two terms — and all of them were decided in favor of the corporate defendants."