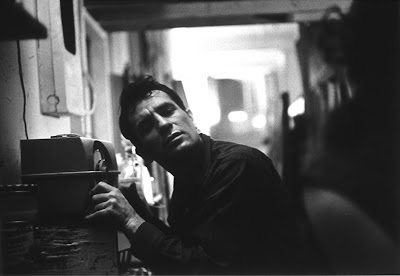 I'm not a beatnik, I'm a Catholic -- JACK KEROUAC
Like a lot of college kids who came of age in the Sixties, reading Jack Kerouac's On the Road was a rite of passage for me, one that occurred a few days into my freshman year when my considerably more sophisticated dormitory roommate loaned me his dog-earred copy.

* * * * *
Jack Kerouac was born Jean-Louis Lebris de Kerouac, in Lowell, Massachusetts some 86 years ago today to French-Canadian parents, Léo-Alcide Kerouac and Gabrielle-Ange Lévesque, who like many other Quebecers of their generation had emigrated to New England to find work.

In a twist of fate, Kerouac broke a leg in a game during his freshman season, soon dropped out of college and began meeting many of the Beat Generation characters who would populate his novels, including Allen Ginsberg, Neal Cassady, John Clellon Holmes and William S. Burroughs. He joined the Merchant Marine in 1942 and the Navy in 1943 at the height of World War II, but was honorably discharged on psychiatric grounds – for having an "indifferent disposition."

Overnight, Kerouac's antics with Cassady, Ginsberg and friends became the stuff of legend in large part because of his inevitably awkward appearances on "The Tonight Show” with Steve Allen and other programs. During his lifetime, many fewer people read Kerouac books than celebrated his adventures through the interviews he gave.

These books are to my mind the most accomplished examples of Kerouac's narrative style, which he later called Spontaneous Prose, a technique akin to stream of consciousness. Indeed, a big reason that I find most of the rest of his writing not as good is because it seems anything but spontaneous although, to bust another Kerouac myth, he rewrote and rewrote all of his manuscripts.

Because these books, notably On the Road, are "about how to live your life," as John Leland puts it in Why Kerouac Matters: The Lessons of On the Road (They're Not What You Think, a sweet little 2007 tome slightly longer than the title. And Kerouac simply was incapable of living that idyllic low-overhead life of work, love, artistry and faith.


This is the 14th in a series of appreciations of the people who have moved and inspired me over the years. It is based in part on the Wikipedia entry on Kerouac.

I read "On the Road' when i was 14 years of age and went off to summer camp with the legs of my jeans dutiful frayed (tattered) to establish my oneness with the Beats. I also mixed yeast under the dining hall with number 10 tins of juice chasing fermentation as best I could.
I also read everything Kerouac and like you Shaun, felt he had sold out excellence in a haste to produce his later works.