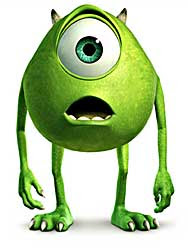 While out riding my trail bike this morning I encountered a Little Green Man who was anxious to quiz an Earthling about the Eliot Spitzer scandal.

Q: Why is this such a big deal?

A: Because people love to see politicians get tripped up, especially other politicians.

Q: On my planet everyone pays for sex.

Q: So your leaders punish people for paying for sex?

A: Sometimes, although in this instance Spitzer inadvertently led the government to a prostitution ring because of his alleged involvement in some suspicious financial transactions.

A: Yes, but not for the reason you might think.

A: He ought to resign because he's an arch hypocrite since he prosecuted several people for operating prostitution rings when he was New York state attorney general.

Q: With all the problems you Earthlings seem to have, what business is it of anyone’s what Spitzer or anyone else does privately with other consenting adults?

A: You're on to something there.

A: No, no, no. He paid $1,000 to have sex with a prostitute. A superdelegate is a Democratic Party bigwig who gets a free ride to the national convention and a free vote.

Q: So Hillary Clinton's not his friend anymore?

A: Let's skip that, okay?Q: It's kind of funny that The New York Times is playing the story so big after it was chided for a story implying that John McCain had sex with a lobbyist.

A: Well, even The Times knows that sex sells, although it should be noted that it's unusual that the feds should go public with the sex angle since Spitzer has not been charged with doing anything wrong in connection with that.

Q: Republicans seem especially gleeful that Spitzer has been snared.

A: Because Republicans by birthright can be hypocritical when it comes to stuff like sex. Why else would Larry Craig still be in the U.S. Senate?