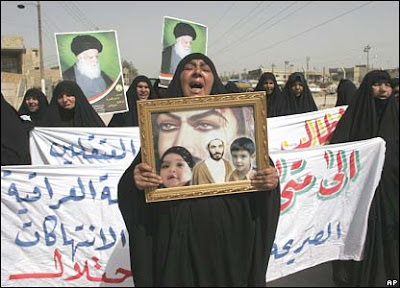 Baghdad demonstrators demand that Shiite prisoners be released
As noted here on February 1, you don't have to be a bloody genius to know that sooner or later the window of opportunity for Iraqi national reconciliation and a lasting reduction in sectarian violence as a result of the military successes of the Surge would begin to close unless there was progress by the Baghdad government.

Well, there has been no progress of consequence despite the wishful thinking of pro-war pundits who endlessly write that the Iraqis are working on This, That or The Other, while the last 72 hours have brought an explosion of violence reminiscent of the Bad Old Days that coincides with the 4,000th American combat death.

There has been no progress because Prime Minister Al-Maliki has no reason to upset his Shiite-dominated applecart knowing that President Bush is committed to maintaining present U.S. troop levels through Election Day and then dumping the whole mess on his successor.

Does this mean that the window of opportunity has closed? No. Not yet.

Does this mean that an unraveling of the success of the Surge is underway. No. It's too soon to tell, but the omens don't look good.

For one thing, the long anticipated re-emergence of the militia loyal to radical Shiite Muslim cleric Moqtada Al-Sadr is underway with calls for nationwide protests and civil disobedience, which has led to clashes in several cities and at least 50 deaths, and fears that a seven-month-old ceasefire by the militia against American troops is unraveling as they jockey for position ahead of provincial elections in October.

Al-Sadr's extended vacation was credited as a -- if not the -- major reason that the military phase of the Surge has been successful in reducing U.S. and Iraqi casualties, and the timing of his return was exquisite coming as it did on the heels of a Wall Street Journal story writing off the cleric as a force to be reckoned with.

Simultaneously, all heck broke loose in the strategic southern port city of Basra, hard by the porous border with Iran, as Shiite militias clashed with Iraqi troops backed by American or British air support.

The British Army had ceded the city center to armed thugs late last year as part of a cut-and-slink strategy to keep its soldiers from getting killed that was equal parts practical and shameful and bound to backfire.

The fighting has now spread to Baghdad and smaller cities and Al-Maliki has issued an ultimatum: The fighters will be spared if they surrender within 72 hours.

How unfortunate that John McCain is not available to walk through some Iraqi market and tell us how everything is just ducky.

mullah cimoc say ameriki so the stupid for usa media to keep him so brainwash.

this kill all for neocon spies in white house and pentagon. also usa to being so punish for the cruel. him woman now slut take LBT (low back tattoo) and sex with every man even gang member. this the ashame.

but ameriki so slave of master in tel aviv. usa media so control.

I've seen the "mihgty wurlitzer" anonymous comment in exact form elsewhere. I'm guessing it's a scam of some sort.

Basra was taken over by Shia religious nuts and Iranian proxies long ago, even while the Brits were still there. With Sunni Triangle comparatively peaceful, it is just time for the central govt to exert its authority in the South. There will, of course, be a huge snap back -- mostly designed to dishearten American news sources. Whether you realize it or not, this war is being fought on your blog as much as in the streets of Basra and Baghdad. The decency and instinctive recourse to fair play on the part of the American people are simply tools in the hands of enemy strategists. John McCain is no genius, but he does have his hands on a different part of the elephant than you are paying attention to.

Sadr, by the way, is probably old news. Iran is going around him.