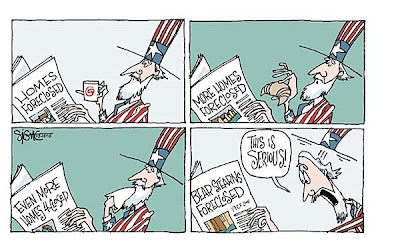 The stock market may rally, until it once again decides that easier money can't remedy what is fundamentally a problem of bank solvency. That problem can only be resolved by financial institutions and regulators coming to grips with the losses, raising more capital to cushion the blow, and closing or selling those banks that can never recover. That will require a more aggressive, and pre-emptive, regulatory role for the Fed -- and that we would applaud.

What the U.S. and world economy don't need is a Fed that continues to insist that inflation expectations are "well-anchored" when everyone else knows they aren't. The Fed needs to restore its monetary credibility, or today's panic could become tomorrow's crash.

-- WILL BUNCH
By the way, one of the most underreported stories lately is how Clinton's lead over Obama, among superdelegates, has steadily eroded since early February. According to trackings by CBS News and The New York Times, 303 superdelegates had declared for a candidate back on Feb. 2; of those declarants, Clinton was ahead by a margin of 105 (204 to 99). Contrast that to March 14, when 322.5 had declared a preference (superdelegates affiliated with Democrats living abroad get half a vote each); on that date, according to the trackers, Clinton's margin was down to only 20.5 (221 to 201.5).

Forbes counts 1,062 billionaires. The number is increasing exponentially. Soon we will all be billionaires and the trickle down vindicated. Who cares about short run economic setbacks?

For most of my lifetime, we’ve been forbidden to talk about any of those long-standing resentments in polite company. Instead, people seethe and nurse grievances. The longer this has continued, the farther apart some segments of society have grown. While I don’t think racism is held by more than a fringe few at any edge of the spectrum, society in general has suffered from unaddressed misunderstandings, and the resentment of dismissed concerns.

Whether Barack Obama wins the presidency or not, I think this speech alone shows that his candidacy has broken down some walls.

If John Edwards openly endorses Hillary Clinton, what could it mean to the nomination race? For starters, it would surprise a lot of Edwards supporters. Most of the unions backing Edwards have moved into the Obama camp, and they may be disappointed by Edwards going the other direction. However, one of Edwards' core constituencies of support was among white men -- who are now firmly in the Clinton camp (if exit polls are to be believed). So while either endorsement from Edwards is going to please some of his supporters and annoy some others, it's not outside the bounds of possibility that he would back Hillary, and influence voters as a result.

The problem for Edwards is that the window of opportunity to make such an endorsement (and have it be relevant) is fast closing.

In news that may have repercussions for Bush's attempt to hide all details of his warrantless wiretapping program, Joseph Nacchio just won a new trial. Mind you, the reason his trial was overturned does not relate directly to his claim that the Administration retaliated against him because he refused to illegally wiretap Americans. Rather, the overturned his case because he was not allowed to make a case for his expert witness.

The Chinese are paranoid about the Dalai Lama for essentially the same reasons that the rest of the world respects him: as the humbly persuasive spiritual leader of a leading world religion whose lack of temporal power diminishes in no way the loyalty and love he commands. He is the main reason why 's methods of ethnic colonisation, fairly effective with other minorities have failed in . Not only is Tibetan culture too far removed from Chinese for assimilation to be feasible; it revolves around religious loyalties that the State cannot reach.