Iraq II: The Other End of the Telescope 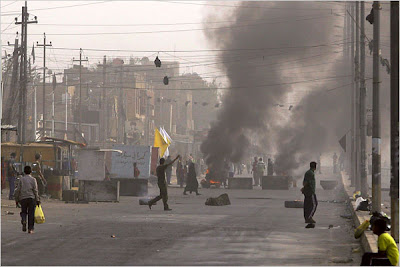 Below is an excerpt of a translation of an article in the Saudi newspaper al-Sharq al-Awsat by editor Tareq Al-Homayed that offers a fascinating insight into how the s closest ally in the sees the outburst of violence in as the presidential race goes into overdrive.

Marc Lynch, who says he checked the accuracy of the excerpt compared to the original Arabic before posting it at Abu Aardvark, notes that Al-Homayed is hard wired to the Saudi royal family and his views probably reflect theirs:

"Muqtada al Sadr is a mighty but reckless force; he is not as intelligent as Hassan Nasrallah and does not speak the language of politics, however he was an important factor in enforcing the Iranian influence at the moment in which Saddam Hussein's regime fell. Today, it appears that no longer needs al Sadr – so long as it has control over within the political framework.

"Nouri al Maliki's regime, with its political prowess as opposed to the Sunni political crudeness, has managed to win over – or neutralize it – as well as bring about American-Iranian rapprochement over the Iraqi issue. This was achieved whilst taking advantage of the political situation in in light of US President George W. Bush's weakness following the Democratic victory in Congress and at time when the has entered into a state of political paralysis as a result of the upcoming elections.

no longer needs Muqtada al Sadr but rather wants a sophisticated model that is even more progressive than Hezbollah's in order to take over . A government in control is much better than an opposition whose only possession and demands are the right to disrupt – such as the case in .

"The importance of the 'Knights' Assault' operation does not lie in American participation but rather in the outcome of Ahmadinejad's most recent visit to Baghdad since it is impossible to target the Mehdi army – the same army that Muqtada al Sadr declares cannot be dismantled except at the orders of the Imam himself, and without Iran's blessing.

" . . . Today at a time when Muqtada al Sadr receives a blow remains tight-lipped, same as the Shiaa clerics and all this is because there is only one control button and it belongs to . Clearly the opportunity is convenient for to tighten its grip on and to exploit the desire for 's stability at any price before the elections take place. After the elections a new president will arrive at the White House to find himself/herself obligated to deal with a reality that enforces itself upon . Even if people change in the next Iraqi government, it will still continue to orbit around ."

To those of us who are up to our necks in the Clinton-Obama-McCain slugfest, the observations on American politics and how the outcome of the election may impact on policy on seems somewhat naïve. But recall that the American media makes sweeping pronouncements on the Middle East's ever shifting tectonic plates all the time that probably strike Saudis, Iraqis and Iranis much the same way.

Photograph by Karim Kadim/The Associated Press
Posted by Shaun Mullen at 5:22 AM
Email ThisBlogThis!Share to TwitterShare to FacebookShare to Pinterest