Hillary Clinton: And So It's Come To This 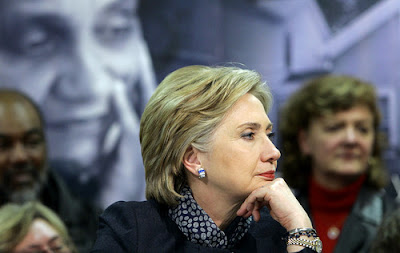 My journalist's instincts and four decades in the political trenches are prompting me to tread with care when it comes to the Hillary Clinton doomsday scenarios increasingly appearing in the mainstream media and blogosphere as the once presumptive nominee becomes ever more desperate in what is now a long shot bid to wrest the big prize from Barack Obama.

The root of my caution is because as much as I have written about how the Clinton campaign has determinedly taken the low road and as ruthless as the candidate has shown herself to be capable of being, I still find it hard to believe that she would try to destroy Obama in order to save her candidacy. And in the process alienate so many voters that John McCain's chances of continuing the Republican hegemony on the White House would be enhanced.

But after the last several days of Mrs. Clinton not only running true to form but turning up the sleaze, I'm beginning to put some stock in what a Democratic National Committee official calls the "Tonya Harding" option in an interview with Jack Tapper of ABC News:

"The question is -- what will have to do in order to achieve it?

"What will she have to do to Sen. Barack Obama, D-Illinois, in order to eke out her improbable victory?

" 'Her securing the nomination is certainly possible - but it will require exercising the Tonya Harding option,' the official said. 'Is that really what we Democrats want?' "

Tonya Harding, for you younguns out there, is the figure skater who was so desperate to win a national championship that she arranged to have competitor Nancy Kerrigan kneecapped.

* * * * *
Libby Spencer has led the charge of left-of-center bloggers who fear that the flame war over the Clinton-Obama smackdown has created "a murderous din that is going to kill us in November," and she asked here that the rhetoric be toned down.

While I agree that the discourse is sometimes loud and impolite, I will not self censor for some perceived greater good and have told several of Libby's colleagues as much in private conversations.

But Libby has now broken her plea for unity. The reason is Mrs. Clinton's gutter sniping at Obama from the inner sanctum of the underwriter of the "vast right-wing conspiracy" of which she has boo-hooed so bitterly over the years -- Republican gadzillionaire Richard Mellon Scaife.

Scaife, who is publisher of the Pittsburgh Tribune-Review, a money-losing plaything, has said among other things that the death of Vincent Foster was the "Rosetta stone" of the Clinton administration and Hillary herself was responsible for Foster's murder."

Hell Has Officially Frozen Over" is how the National Review headlined its story on the improbable meeting. I myself would use less charitable language noting Mrs. Clinton's willingness to insert herself into any available anatomical cavity to advance her campaign.

* * * * *
It was something of a shocker when Bill Richardson, who was Bill Clinton's energy secretary and a U.N. ambassador, endorsed Obama, but in subsequent comments he made it clear that he couldn't abide Mrs. Clinton's sleaze.

Now comes Robert Reich, who served with such distinction as Bill Clinton's treasury secretary, who says he's had about enough.

* * * * *
Libby's colleague Fester at Newshoggers has a refreshing way of looking at the campaigns:

"If each campaign was a home construction firm, most campaigns would have built houses suitable for Dennis Kucinich on Jupiter, very low floors of initial bedrock support and fairly low ceilings. The home would be good for gnomes. John Edwards built a home good for the Arctic circle with strong walls and a steep slope roof to allow the snow and support to rapidly fall off. Barrack Obama's campaign has built a home suitable for Manute Bol or Yao Ming --- low floors and very high ceilings.

"The campaign has built a very different house as her structural advantages and disadvantages going into the campaign were very different. She had very high floors, but fairly low ceilings, she it was built for dwarfs in a low gravity environment. She knew that she had a solid 30% to 40% of the Democratic primary electorate attached to her hip, but gaining the remaining ten to twenty points to assemble either a majority or a sufficient plurality would be very difficult. She has had little room to grow . . . "

* * * * *
I have had the privilege of working this week with the researcher for a Pulitzer Prize-winner presidential historian who shares my journalistic instincts and has an additional decade in the trenches on me.

We were talking about the presidential campaign, which she agrees is the most closely fought, exciting and improbable of our lives.

But this 70-something woman, a resident of New York City who said she found much to admire in Hillary Clinton, twice voted for her and thought her husband was a pretty terrific president, is infuriated at Mrs. Clinton for betraying what have turned out to be her phony ideals.

I have to admit that I was so saddened and then became so depressed as one talking head after another addressed this ongoing catastrophe that I couldn't make it to the end of the second part and fled into the embrace of "Antiques Roadshow" on another channel.

The overriding message of "Bush's War" is that virtually every one of the plans and assumptions of the war's architects has been revealed to be deeply flawed and this benighted lot of arrogant pols let nothing get in their way, certainly not any pesky snipers, obfuscated when they were caught out and then lied about their lies.

Does this sound like the Clinton campaign or what?

Photograph by Carolyn Kaster/The Associated Press
Posted by Shaun Mullen at 5:29 AM
Email ThisBlogThis!Share to TwitterShare to FacebookShare to Pinterest

On the Clinton/Obama front, I'm reminded of what Doc Thompson said:
"Presidential politics is a vicious business, even for rich white men, and anybody who gets into it should be prepared to grapple with the meanest of the mean. The White House has never been seized by timid warriors. There are no rules, and the roadside is littered with wreckage." -Hunter S. Thompson