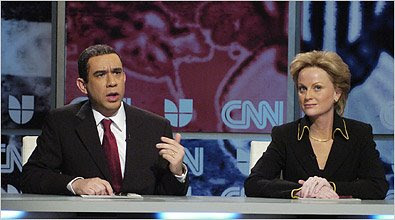 Lorne Michaels has an answer to the political columns, cartoons and comments that have accused his show, "Saturday Night Live," of favoring Senator Hillary Rodham Clinton during her primary showdown with Senator Barack Obama: Nope.

Over the past three weeks "SNL" has put itself back into the national discussion — not a bad place for any television show to be, as Mr. Michaels acknowledged — first with a series of sketches that have centered on the premise that Mrs. Clinton has been the target of a vengeful press that sees Mr. Obama with stars in its eyes and also with the overt (albeit comic) endorsement of Mrs. Clinton by Tina Fey, the former "SNL" star who returned on Feb. 23 to be the host of the first show after the recent writers’ strike. "Bitches get stuff done," Ms. Fey said, using herself as an example.

In the weeks that followed, some commentators have cited the comedy bits as aids that have helped revive Mrs. Clinton's campaign with primary victories in and . A study by the Pew research organization found that critical coverage of Mr. Obama had increased in the news media after the sketches.

Senator John McCain hailed as a spiritual adviser an megachurch pastor who has called upon Christians to wage a "war" against the "false religion" of Islam with the aim of destroying it.

If you're a Democrat, you should be absolutely outraged, incensed, and weeping with frustration at the prospect of tens of thousands of Republican voters entering your primaries in order to support the candidacy of Hillary Clinton.

These GOP pranksters are not voting for because someone put something in the water thus turning them from being rabid dog haters into slavish Hillary bots. Rather they are trying to keep Barack Obama from winning the nomination believing that Hillary will be easier to beat than the charismatic Obama.

For myself, I'm not so sure. My own guess is that Obama is going to be damaged goods by the middle of summer thanks to his relationships with Tony Rezko and his crooked cronies. He would be a much easier general election target for McCain who will be seen as a paragon of virtue next to Obama.

Regardless, Rush Limbaugh has been pushing this campaign for Republicans to game the system and vote for Hillary in Democratic primaries. What's even worse for Democrats is that it seems to be working.

Is it time for Howard Dean to call in the party's Three Wise Men to build an ark and save the Democrats from a flood of Biblical proportions?

Most of those states haven’t voted Democratic in a presidential since the Johnson landslide over Goldwater in 1964, and we don’t see that changing. They’re great states, but , and the are not going to be in the Democratic column in November. He’s winning the Democratic process, but that is virtually irrelevant to the general election.

The House Republican brand is so bad right now that if it were a dog food, they'd take it off the shelf.

Infuriated by Barack Obama's ascent, Geraldine Ferraro, erstwhile feminist icon, has transformed herself into Archie Bunker in heels. First she claimed that Obama owes his electoral success to being black, as if Hillary Clinton were some unlucky victim of affirmative action, in danger of losing a job she deserves to an unqualified token. As the uproar over her comments grew, she dug in further, claiming that she herself is the injured party: "Racism works in two different directions," she said. "I really think they're attacking me because I'm white. How's that?"

. . . Some have suggested the whole thing was part of a scheme to ratchet up racial tensions in advance of the primary. That's possible, but there's a simpler explanation. Several otherwise admirable, even heroic women seem to identify with so profoundly that they interpret rejection of her as a personal rebuke. Stung, they accuse Obama supporters of flighty illogic, but there's a powerful, extra-rational emotional current in their arguments, a flailing in the face of an imagined betrayal. In their anger, they're lashing out in all kinds of counterproductive ways, doing far more damage to feminism than a loss ever could.

Harold Ickes misstates Nebraska's value to Obama and only Obama.
Electors are apportioned by congressional district in Nebraska and Obama has a lock a number of these electors.
This is FOX News type spin by Ickes. If the facts are inconvenient. Ignore them. From the Rove playbook, the Clinton camp is trying to take credit for the massive turnout in the Dem primaries vis a vis the Republicans. Sorta kinda like Obama gets 50,000 at rallies and Hillary needs to call in party fillers to get 3,000. Ayup, spin it Mr. Ickes.