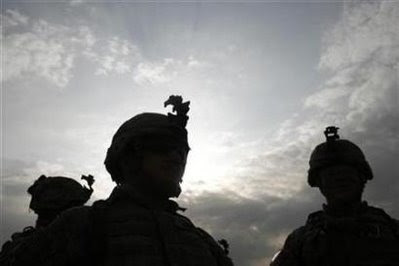 I could see the self-interest of the officials pushing for war - how war would benefit their political party, their department within the government, enhance their own status at the expense of rivals. Libertarianism made it clear how absurd the idealistic case was. Supposedly, wise, firm and just American guidance would usher into a new era of liberalism and comity. But none of that was going to work unless real American officials embedded in American political institutions were unusually selfless and astute, with a lofty and omniscient devotion to Iraqi welfare. And, you know, they weren’t going to be that.

[Y]ou need to put in strategic context. The goal wasn't merely to topple Saddam, but to intimidate other "rogue" regimes by creating a credible threat to take them out too. That meant that something like a 350,000 troop, 15-year commitment wouldn't achieve the goals of the policy. It wasn't "incompetent" for Bush, Cheney, and Rumsfeld to have rejected those methods; the rejection followed directly from what they were trying to accomplish.

There are advantages to be gained from taking possession of a country rather than simply befriending its leader. Consider and .

, as was recently observed in this space, is a possession of George Bush. Though sovereign in theory, was powerless to contradict Mr. Bush when he said it was all right for to invade that country. All Iraq could do was have its prime minister, Nouri al Maliki, make a phone call to Tayyip Erdogan, the Turkish Prime minister, to let him know of the need to “respect Iraq sovereign authority.” The call preceded the invasion. Being sovereign, however, could play host to ’s Mahmoud Ahmadinejad even though Mr. Bush dislikes him and he is the leader of one of the countries that might be described as the Bush-Cheney axis of hatred.

is a country whose leader Mr. Bush has befriended without first invading his country. Although he continues to instruct on how it should conduct its affairs, he lacks the clout he has in . As a result, the country’s citizens and officials have enjoyed thumbing their noses at Mr. Bush, notwithstanding his friendship with its president, Pervez Musharraf. Most recently the nose thumbing by the good citizens and officials pertained to elections and judges in .

The improvement in Iraq amounts to casualty rates that have decreased to the unacceptable levels of 2005, no exit plan for years and a bill accumulating at almost $5,000 per second.

Moqtada al-Sadr -- the radical cleric dubbed "The Most Dangerous Man in " by a Newsweek cover story in December 2006 -- has just unilaterally extended the ceasefire he imposed on his Mahdi Army militia last summer. And on the eve of the Iraq War's fifth anniversary, Sadr also issued a somber but dramatic statement. He not only declared that he had failed to transform , but also lamented the new debates and divisions within his own movement. Explaining his marginalization, Sadr all but confessed his growing isolation: "One hand cannot clap alone."

What happened? Over the past five years, Sadr has been one of the most persistent and insurmountable challenges for the U.S. Leveraging his family's prestige among the disaffected Shiite underclass, he asserted his power by violently intimidating rival clerics, agitating against the U.S. occupation, and using force to establish de facto control over Baghdad's Sadr City (named after his father, and home to two million Shiites on the east bank of the Tigris) and large swaths of southern Iraq.

[T]he security that has been achieved here [in Fallujah] is fragile, the result of harsh tactics recalling the rule of Saddam Hussein, who was overthrown five years ago. Even as they work alongside forces, [Police Chief] Zobaie's men admit they have beaten and tortured suspects to force confessions and exact revenge.

<>Who knew? President Bush wants to be unpopular.

Not really, of course, but that's what his press secretary said.

Spokeswoman Dana Perino was making the case that it's no surprise that Bush has low poll ratings because he is overseeing an unpopular war. But then her argument went off the tracks.

"Both the president and the vice president have long believed, and it's a part of what has made them the leaders that they are, which is not to chase popularity polls but to hold themselves to a standard that requires people not to like them," she said.