'No Torture, No Exceptions' 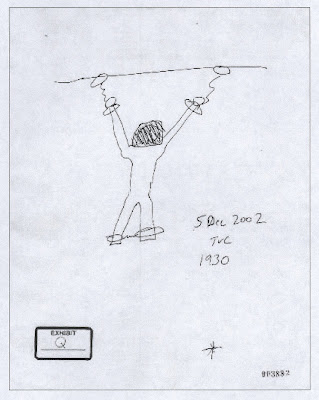 In lieu of our usual Quotes From Around Yon Blogosphere, we offer a sampling of commentaries from the current issue of the Washington Monthy, which is devoted entirely to the subject of torture.

The sketch is by Military Police Sergeant Thomas V. Curtis of Dilwar, an Afghan detainee who was taken into custody on , deprived of sleep and chained to the ceiling of his cell. Dilwar died five days later.

There will be no greater and enduring shame from the Era of Bush than its embrace of Nazi-like torture techniques.

Today, in the struggle to finish off the extremists plotting against us, it won't be torture and fear that win the day for . Far from it. Nations that torture end up despised and defeated. No, to win we'll have to live up to the values we profess, the belief in human rights, equal justice, fair trials, and the rule of law. These ideals are potent weapons. They will give us allies, friends, information, and security — but only if we live them.

We've done it before. In the thrust and parry of the cold war, 's adherence to proper standards and international law won us respect, allies, friends, and, ultimately, the influence that helped bring down the Soviet system. And we can have the same success in our fight today. We just have to make more friends and fewer enemies. And in such a strategy, there's no place for torture. Or for those who would torture.

As a teenager, I loved to read comic books. Superman comics were my favorite. Among the many adversaries the Man of Steel faced (and always vanquished) was Bizarro World. In Bizarro World, everything was the opposite of that which prevailed in our world. Up was down, clean was dirty, black was white, good was bad ... you get the picture.

Events of the past few years remind me more and more of Bizarro World, except now it's not a comic-book world, it's the real world. The effect of witnessing a federal government operating according to Bizarro World standards instead of those enshrined in our Constitution and legal system is truly frightening.

is a country founded on human rights. Human rights define who we are as a nation and as a people. A ban against official cruelty is one of our most sacred values. If we condone it, we gain nothing, and lose our identity.

The case for torture is essentially a national security argument: that extreme interrogation techniques are necessary in a fight against global networks of terrorists in which the gathering of sensitive information is crucial. In the long view of history, this is a dangerously shortsighted argument. Our national security relies on far more than rounding up and questioning terrorist suspects.

American power in the twenty-first century depends on whether the can be the nation that my parents and many millions of other immigrants came to know: a country that stood for both strength and decency. If we lose that moral authority, 's global dominance will be rejected by the billions of non-Americans over whom the projects its power. 's ability to lead, let alone inspire, will be severely compromised. And in an increasingly competitive world economy, the most talented and skilled immigrants will look elsewhere, eroding the formula for 's remarkable success that has worked for two centuries.

Many will say that has never been the honorable nation it claims to be. That was not my parents' view, and it is not mine. If is to retain its preeminence in the years to come, it must be not only an economic and military hyperpower, but a moral hyperpower too.

We are in a war of ideas against a radical extremist ideology. Effective and aggressive intelligence operations are essential to our security. But in our effort to protect the nation, we must remember our greatest strength: the principles of human rights that we have upheld throughout our country's wars and conflicts. It is vital that the world can trust what we say and have confidence in what we do. There must be no doubt that this great nation does not torture.

I worked as a special agent for the FBI's Osama bin Laden unit from 1996 to 2002. During that time, my colleagues and I had the chance to question numerous operatives from al-Qaeda. We broke many terrorists. But we did it the right way: by being intelligent and humane.

One man we captured was Ali Abdul Saoud Mohamed, an al-Qaeda operative behind the 1998 bombings of the embassies in and . Ali Mohamed had fully expected to be tortured once we took him in. Instead, we assured him that we wouldn't harm him, and we offered to protect his family. Within weeks, we had opened a gold mine of information about al-Qaeda's operations.

. . . Intelligence failures had much to do with the atrocity of September 11, but those had nothing to do with a lack of torture. Let me be clear on one crucial point: it is the terrorists whom we won over with humane methods in the 1990s who continue to provide the most reliable intelligence we have in the fight against al-Qaeda. And it is the testimony of terrorists we tortured after 9/11 who have provided the most unreliable information, such as stories about a close connection between al-Qaeda and Saddam Hussein.