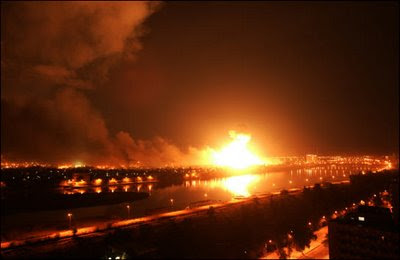 The more things change the more they remain the same, and that certainly is true of the mainstream media's abysmal coverage of the war.

While there are occasional exceptions, most media outlets continue to swallow the Bush administration's lies, obfuscations and talking points whole, which it has done since the run-up to the March 2003 invasion, and that is why a casual viewer or reader is left with the impression that things are going rather grandly as the war lurches into its sixth year.

After all, and civilian casualties are down because of the bang-up job that General Petraeus and his troops did in executing the Surge strategy.

What the MSM is not reporting is why, if the Surge has succeeded, are there no plans to begin a drawdown of U.S. troops and why President Bush is arguing that present levels must be maintained for the indefinite future.

The answer is an open secret: The other half of the Surge strategy, a good-faith effort at national reconciliation, was stillborn and any drawdown of consequence could tip a country into chaos that lives a day-by-day existence and in recent days has been showing some serious signs of bloody backsliding.

The mainstream media had plenty of company in its epic rollover. Congress and most Americans also drank the Bush Kool Aid, but the MSM should have known better, which makes the abrogation of its responsibilities all the worse.

The reasons it bailed on the war are twofold:

* The consolidation of the MSM into the hands of a few corporations more interested in good profits than good journalism. You know, we can't really go after the Bush administration because that might drive away advertisers and otherwise hurt our bottom line.

* * * * *
The disconnect between what the MSM was saying and what I felt in my gut and knew in my head as a career journalist – the upbeat coverage and the administration's rosy pronouncements versus the far less positive anecdotal reports from the field and insightful blogging by realists like Juan Cole -- grew wider as the first year anniversary of the war passed. And then the second, third and fourth anniversaries even as books arrived on the scene that told a very different story about the run-up to the war and its early days than that being peddled by the MSM.

Worst of all, there continued to be no consensus in the MSM about why there had been a war in the first place. And there were very few reporters beyond the dogged duo of Jonathan Landay and Walter Stroebel, formerly of the former Knight Ridder and now McClatchy Newspapers correspondents, who stepped back far enough to see that the media and public had been sold a bloody bill of goods.

The most infamous retailer in this regard was Judith Miller, a Pulitzer Prize-winning reporter for The New York Times who broke a slew of cardinal rules of journalism, including becoming too close to her sources and ultimately being co-opted by them, inserting herself into the middle of her stories and running roughshod over her editors in repeatedly asserting that there were WMD.

The Times may still be the greatest newspaper on earth, but for me its reputation will forever be tarnished and its credibility forever suspect because of the Miller scandal, which it made much worse because of its own institutional failures.

As the day wore on, the purpose of the visit became clear: The White House wasn't getting the kind of coverage it wanted from the Washington press corps and was appealing directly to editors like myself to help sell its story.

It is difficult to conceive of the Bush administration feeling the need to roll out the red carpet for my counterparts today. What a difference two decades, a botched war and a cowed media make.

Shaun - Good Morning. I'm curious, did Joe shut down Moderate Voice? It's been offline for days. Has it moved? If you have any information, I would appreciate it. Thanks. jdledell