Why Hillary Must Come Clean About Bill 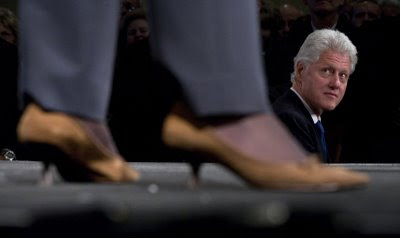 Few things are certain in this season of political upheaval on such a seismic scale, but here is one that is: Should Hillary Clinton win the nomination and the election, Bill Clinton will not morph from an alpha male into a passive male on Inauguration Day and will have an outsized, historically unprecedented and unwelcome impact on her presidency.

The former president has played a central role in his wife's quest for the White House. She has depended on him so much that the fortunes of her campaign are inextricably tied to him and how voters perceive Bill Clinton has been as important as how they perceive Hillary Clinton.

It is time for Mrs. Clinton to drop the blather about her independence and explain how a co-presidency is something that the American people should welcome since they will in effect be voting for two people should she survive the primaries and convention.

There are only two historic precedents for what will transpire if Mrs. Clinton is elected: Edith Wilson and Eleanor Roosevelt. (Yes, I know that Nancy Reagan consulted an astrologer for President Reagan, but that’s different.)

When President Wilson's health failed and a stroke left him partially paralyzed, Edith became the acting president and took over many of the details and duties of government. She vociferously opposed allowing the vice president to assume the powers of the presidency and the numerous failures that occurred during her husband's incapacitation were her doing.

Eleanor s role during President Roosevelt's 12-plus year tenure was hands on from start to finish and she was a key player in shaping his domestic agenda. While still attending to the more traditional First Lady roles, she was an important connection between Great Depression victims and the government bureaucracy, and later between African-American civil rights leaders and the White House.

Yet neither of these predecessors come close to approximating the possibility that the next president will be married to a former president, as well as the unhappy prospect of two families monopolizing the White House over three decades.

The release last week of thousands of pages of Hillary Clinton's personal records as First Lady confirms that while she did not necessarily help make major policy decisions, she certainly was a co-president to an extent that First Ladies since Eleanor Roosevelt have not come close to replicating.

The full extent of her involvement is difficult to gauge because nearly half of the 11,000 pages of records have been redacted, some no doubt because of third-party privacy concerns but others probably to obscure the role she played in dealing with the administration's multiple controversies. This included the Monica Lewinsky scandal where she not only forgave her husband's humiliating behavior but helped strategize his defense against impeachment proceedings.

Should Hillary Clinton be disqualified because she is married to a former president? Not necessarily. But as it is, she has been extraordinarily obtuse in addressing questions concerning a co-presidency while her husband laughs off such queries.

Yes, these are uncomfortable questions and ones that roil the tender sensibilities of Clinton sycophants. But they must be asked since the course that the takes if Hillary Clinton is elected is inextricably tied to them. And they must be answered if we are to trust her judgment and her ability to do the job.

There has been criticism, much of it justified, that the mainstream media went too easy on Barack Obama for too long.

But now it is Hillary Clinton who is getting a pass because there is virtually no chance of her winning the nomination unless it is revealed that Obama has a secret family in Idaho, as one pundit put it, or she steals the nomination outright, yet references to this reality are few and far between in news stories.

Let's go to the numbers:

Obama leads 1,406 to 1,249 in The Associated Press pledged delegate count, leads 250-212 in Politico’s superdelegate count, trails by about 990,000 in the primary popular vote count and is roughly tied in congressional endorsements. Meanwhile, the Florida and Michigan insurrections have mercifully ended.

will have to win the 10 remaining primaries with at least 60 percent of the vote, something that she has failed to do in all but three states so far, in order to draw even with Obama in pledged delegates.

About 260 superdelegates remain uncommitted and about 70 have yet to be named, but s superdelegate lead has been shrinking steadily and if the national polls are to be believed, Obama has gotten a pretty good bounce off of that race-and-religion speech.

If the numbers and circumstances were reversed, can you imagine the pressure on Obama from the Clinton camp to pull out?

s surrogates maintain that she remains competitive. But that is true only in that neither she nor Obama will have enough delegates to win the nomination outright. Simply and starkly put, Clinton will be unable to win a brokered convention without resorting to dirty dealing.

I am less concerned than the average Democratic bear that a prolonged primary fight favors John McCain, who is getting a free ride as he bumbles through March. More concerning is the shape the Democratic Party will be left in if Clinton resorts to slash-and-burn tactics to wrest the nomination from Obama.

I respect your feelings, Obama is a Stand up guy,,but he losing American right and left,
When he made it a point to go on every news media and say he NEVER Heard REV Jeremiha Wright, say those things,,, then a week Later,,,He make his speech and flat out says Yes He was in church when he made those Remarks right there and then ,, Barack Obama is just a politician who just trying to get Elected,,, He Lied to all American,,, A lot of American including including Republican,, if Obama made it about Race,,, the black Community Will lose the Race,,My self, being a Mexican American, I would love to see, A black President Barack Obama is not him anymore,,, He has No integrity,,, and already lied Live on TV,,,Obama want everyone to look Beyond Race,,, Thats where he loses people,,,He telling All American,,, Look beyond Race while he hold a double standard, when it comes to Race,,,All America See's that,, Like I said again and again,,almost 6 month ago When Don Imus said those things about the womens basketball Team,,Barack Obama said he should get fired,, Honestly I felt he should get fired,,,
but Jeremiah Wright we seen what he said about America and what He said about Hilary clinton personally He was way out of line,,, those comment are 1000 time worst than Don Imus,,, Obama refuse to Denounce him out right,,, then he tells every lets get beyond Race,,Barack has a double standard,,, just like Jesse Jackson & Al sharpton,,,
No American should be doing any kind of Remark like that,,, And I agree but when a black man does it and its happening more and more,, and In Jeremiah Wright, way worst,
there an excusee over excuses,
In other words,,, Barack Obama speech is saying "All White Americans Look Beyond Race"
While all black American live by there Double standard,,
Until Obama comes out clean, The Democratic party will remain split... I am in charge of over 100,000 blog pages that getting the word out against Barack Obama,, I monitor personally over 500,000 Negitive blogs on Hilary,,,geting the fact out,,,,If Barack Obama Really want Change,,,Then he going to Have to Start with him self,,,,