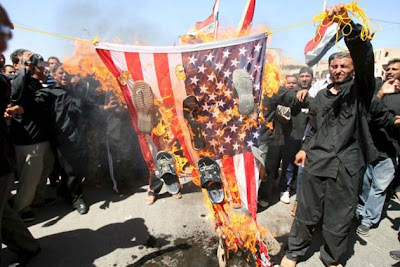 ANTI-AMERICAN DEMONSTRATORS IN BAGHDAD
Although it at first may seem like a strange way to look at the latest round of bloodshed in Iraq, it's all about Prime Minister Nouri Al-Maliki casting the first vote in that country's much anticipated provincial elections.

The result is a troubling new chapter in the Forever War: Basra city and parts of Baghdad are under siege, the seven-month ceasefire called by Moqtada al-Sadr is history and Iraq has entered a perilous new phase that no amount of bribing by General Petraeus's paymasters or speechifying by George Bush can change as U.S. troops get sucked into a maw that the White House and Pentagon were instrumental in creating in giving the prime minister no-strings-attached support.

Al-Maliki's stalled offensive, which would have collapsed without U.S. air and ground intervention and eventually will, is all about politics, not national reconciliation. For Bush to call it "a defining moment in the history of a free Iraq" on top of the Pentagon's contention that it is a "byproduct of the success of the Surge" is laughable in an Orwellian sort of way.

Provincial elections, one of the few Bush administration benchmarks for measuring Iraqi progress that have not been discarded as utterly unrealistic, are to be held on October 1.

The Madhi Army of Al-Sadr, the anti-America Shiite cleric, holds the keys to Basra and has since the British Army ceded its role as American helpmate because the number of casualties it was taking had become a public-relations nightmare for the Labor government back in London.

Al-Maliki desperately needs Basra, the oil-rich province on the porous border with Iraq, but the British are cowering in their barracks and there is no American military presence, hence the botched offensive on Basra city, the second largest in Iraq, where the 30,000-man Iraqi army and security forces find themselves surrounded by the Madhi Army, which has set up checkpoints and is now controlling access to the city.

Al-Sadr's gunmen are thugs, but so are the gunmen belonging to the Badr Organization, the militia affiliated with the Islamic Supreme Council of Iraq (ISCI), which is joined at the hip with the prime minister.

Iran not only has a dog in this race, it has all the dogs in the form of close ties with Al-Maliki, Al-Sadr and ISCI, which makes Washington's breast beating over the meddlesome Tehran regime so tiresome.

Herewith a roundup of reactions to the latest developments.

"My reading is that the faced a dilemma in . It needed to have new provincial elections in an attempt to mollify the Sunni Arabs, especially in Sunni-majority provinces like Diyala, which has nevertheless been ruled by the Shiite Islamic Supreme Council of Iraq [ISCI]. But if they have provincial elections, their chief ally, the Islamic Supreme Council, might well lose southern provinces to the Sadr Movement. In turn, the Sadrists are demanding a timetable for withdrawal, whereas ISCI wants US troops to remain. So the setting of October, 2008, as the date for provincial elections provoked this crisis."

Fred Kaplan, like me a card-carry member of the There Are No Good Guys school, writes at Slate that:

"Maliki's official reason for the offensive, simply to bring order, has some plausibility . . . The current fighting in Basra is a struggle for power and resources between warlords. It's hard to say which faction is more alluring or less likely to fall under Iranian sway. Neither seems the sort of ally in freedom and democracy that our president conjures in his daydreams.

"It's not a case of good vs. evil. It's just another crevice in the widening earthquake called Iraq."

Ed Morrissey gives Al-Maliki a big wet kiss at Hot Air and blames it all on the Brits:

"The fighting in Basra now was inevitable at some point. Baghdad couldn’t allow a major city like Basra to operate outside its control forever. Instead of an orderly transition from Coalition to Iraqi security control, as is happening in the West, the Maliki government now has to take Basra by force — while the rump of British power sits in its bases, unable to contribute at all to security any longer. Whether Maliki decided to do this next week or next year, the fight in Basra had to happen at some point in order to apply the rule of law throughout Iraq.

"That's why this isn’t a collapse of the American surge, but a demonstration of the folly of premature withdrawal. The lack of fortitude on Iraq left a vacuum that created bigger problems and more serious fighting than tenacity did. Had we listened to the war’s critics in 2005 and 2006, gangsters would have swallowed the entirety of Iraq, and we would have a second Somalia in southwest Asia."

While Fester has Al-Maliki's measure in a Newshoggers analysis:

"One of his big problems is that the Sadrists will beat him politically and can go even with him on the corruption and distribution of spoils. So he has to take down Sadr or at least massively rejigger the political equation. And this offensive is his attempt to do so, and it has two interesting option trees. The first is that it actually works in defeating and seizing (intact) the Basra oil export profit center. . . . The other option tree is far more interesting.

"Let us assume that this is a deliberate provocation exercise.

"In this scenario the Iraqi Army attack into 's Mahdi neighborhoods does not go well, but it provokes a national Sadrist response which starts a strategic countdown clock. This count down clock includes increased Sadrist/JAM actions against Iraqi government and US Forces such as rocket/mortar attacks on the Green Zone, and attacks against the oil export infrastructure."

Hey there, Medfordite~! Long time no see. I met Will Bunch today at the Eschaton conference and asked if he knew you. He smiled widely and say yeah, sure.
He said that you are writing a blog and it is up at the top of his blog roll. Fancy That!

I am writing a blog too.
the Delaware Way blog.

See you around, friend!