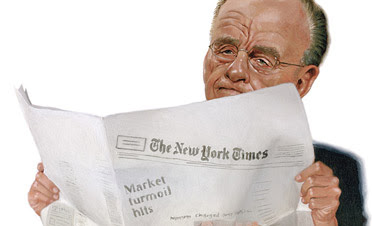 Howell Raines, who was executive editor of The New York Times from 2001-2003, is credited with bringing a healthy dose of advocacy journalism to the Gray Lady but was brought down by the Jason Blair scandal. He warns in his new column in Condé Nast's Portfolio.com that there is no greater threat to American journalism than the possibility that media mogul Rupert Murdoch or some other unwelcome suitor would force its sale.

"He will spend whatever it takes to undermine the Times' standing as America's leading general-interest newspaper. But my real fear is that Murdoch or some other unsuitable purchaser will then buy the Times through a combination of financial and psychological pressures on the strong, but hardly ironclad, Sulzberger family trust that controls the vast majority of the company's voting stock. There is no more important question in American journalism than the future of the Times, and I don't think the newspaper or the journalistic profession is taking Murdoch in particular or the takeover issue in general seriously enough."

It is hard to argue with Raines about the threat, but it is no one's fault but its own that The Times is not the newspaper that it once was -- much improved in some respects but so troubled in many others -- and it should be no more immune to the ongoing shakeout in the newspaper biz than any other publication.


Illustration by Robin Eley
Posted by Shaun Mullen at 5:33 AM
Email ThisBlogThis!Share to TwitterShare to FacebookShare to Pinterest

Well, I am inclined to think that media concentration is a very bad thing. I have issues with the Times, but on the whole it is a remarkable newspaper, so much good stuff! I will be more than sad to see it swallowed up by a depressing economic side-effect like Murdoch.