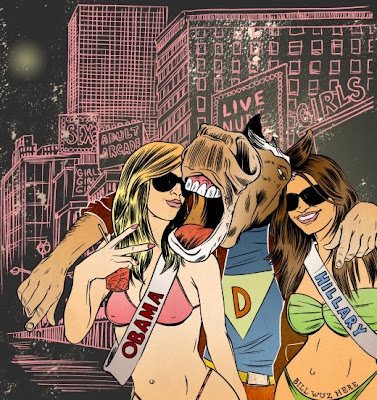 Question for the Obama camp: Is anybody in charge these days?

Obama is now being questioned about everything from campaign strategy to his judgment on choosing aides. And the fact that some of those aides have gone off the reservation on vitally important issues would seem to indicate a lackadaisical approach to controlling the message of the campaign.

Contrast the Obama’s campaign scattershot message lately with that of the Clinton camp werre everyone from the candidate on down to surrogates knows what the talking points are for the day and delivers a consistently clear message. It is that kind of discipline that appears to be lacking from the Obama camp and will only raise more questions about the inexperienced Obama’s fitness for the highest office in the land.

I don’t have a problem understanding why some people support Obama and some people support . It really puzzles me why lots of people don’t get that simple fact. The point is not that the candidates are identical and no one should be a supporter or care who wins, it’s that you should recognize that the other person’s supporters aren’t necessarily deluded or stupid. You may disagree with their reasons, but they have them.

The real message of Tuesday's primaries is not that Hillary won. It's that she didn't win by enough.

The race is over.

The results are already clear. Obama will go to the Democratic Convention with a lead of between 100 and 200 elected delegates. The remaining question is: What will the superdelegates do then? But is that really a question? Will the leaders of the Democratic Party be complicit in its destruction? Will they really kindle a civil war by denying the nomination to the man who won the most elected delegates? No way. They well understand that to do so would be to throw away the party's chances of victory and to stigmatize it among African-Americans and young people for the rest of their lives. The Democratic Party took 20 years to recover from the traumas of 1968 and it is not about to trigger a similar bloodletting this year.

[] is hardy, resilient, tough. She is a train on a track, an Iron Horse. But we must not become carried away with generosity. The very qualities that impress us are the qualities that will make her a painful president. She does not care what you think, she will have what she wants, she will not do the feints, pivots and backoffs that presidents must. She is neither nimble nor agile, and she knows best. She will wear a great nation down.

I don't want to disparage anyone because of their race, their ethnicity, their name - whatever their religion their father might have been. I'll just say this: When you think about the option of a Barack Obama potentially getting elected President of the United States -- I mean, what does this look like to the rest of the world? What does it look like to the world of Islam?

I will tell you that, if he is elected president, then the radical Islamists, the al-Qaida, the radical Islamists and their supporters, will be dancing in the streets in greater numbers than they did on September 11 because they will declare victory in this War on Terror.

Stunning many who considered the district west of reliably Republican territory, Bill Foster, a physicist and Democrat, won a special election on Saturday to fill the Congressional seat that J. Dennis Hastert, the former speaker of the House, held for two decades.

Mr. Foster's success deeply disappointed Republicans, in part for its broader implications: the victory in this early race may buoy Democrats as they look ahead to a string of Republican retirements this fall.

I'm confused. Was Peggy Noonan talking about GW Bush or Hillary Clinton? It's so hard to tell anymore.