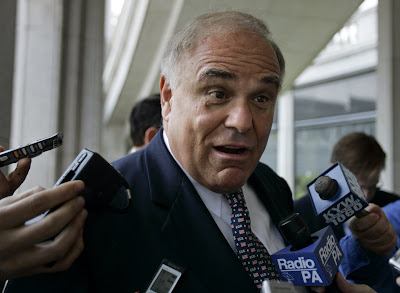 I had been trying to get up with Ed Rendell for days for his reaction to the report by a blue-ribbon panel that found the Philadelphia Police Department had poor leadership, was soft on bad cops and well behind the times in how its officers were deployed and the equipment they were given. In other words, business as usual.

The mayor, despite his considerable accomplishments, had never screwed up the courage to confront the perennial but politically sensitive mess at the Roundhouse, the police headquarters. He was ducking my phone calls so I went to his public appointment calendar and found that he was speaking at a luncheon meeting of a business group at a Center City hotel.

I staked out the hotel lobby and there came the mayor, as usual a good half hour late and as usual without a security escort. As he stepped into an elevator I slipped in behind him. The doors closed and I pounced.

In typical Rendell fashion, he first refused to address the report. But with some gentle prodding as the elevator zipped upwards, he acknowledged that there were indeed big problems and, after we stepped out onto the top floor, he positively warmed to the subject and spoke to me at some length.

It was classic "Fast Eddie" Rendell, an eminently likable man who through two terms as Philadelphia district attorney, then two terms as mayor and now in his second term as Pennsylvania governor with time out to be Democratic National Committee chairman during the 2000 presidential election, has made a habit of speaking uncomfortable truths, as well as saying the right thing at the wrong time -- a rare trait for a consummate politician.

The voluble 64-year-old Rendell is at the top of his game and will be very much in the news as the point man in Hillary Clinton's campaign in the run up to the Pennsylvania primary on April 22, a contest that she must win by a substantial margin as she falls further behind Barack Obama in the delegate and superdelegate count.

It is a job for which the arm twister and deal maker is especially well suited, but he is bound to give the Clinton campaign chest pains.

Rendell already has attracted attention by speaking an uncomfortable truth last month in saying "You've got conservative whites here [in Pennsylvania], and I think there are some whites who are probably not ready to vote for an African-American candidate."

As it was, Rendell coasted to a landslide victory in 2006 in beating Republican Lynn Swann, the black former Pittsburgh Steelers running back, who was long on star power but short on experience.

Then earlier this month, as Clinton was hammering Obama on what she said was his lack of experience, Rendell inadvertently spoke another truth in telling reporters that "Whether it’s Senator Obama for the president and Senator Clinton for vice president or vice versa, I think it would be great." (Rendell, on a roll at that point, then predicted that John McCain would pick Mitt Romney as his Republican running mate.)

Out-of-town reporters questioned how committed Rendell was to , but the locals understood that it was just Fast Eddie being himself.

* * * * *
Edward Gene Rendell, the grandson of Russian Jewish émigrés, grew up in , attended university and law school in and stayed.

In 1991, Rendell was easily elected mayor, succeeding W. Wilson Goode, the city's first black mayor, after the death of Republican challenger Frank Rizzo, the legendary hard-line police commissioner who gave Rendell his nickname (and was responsible for exacerbating many of the department's problems because of his bull-headed and racially divisive leadership).

Goode was a man of overweaning incompetence exemplified by his becoming the first American mayor to drop a bomb on his own city – the culmination of a longstanding confrontation with the radical group MOVE that ended with 11 deaths and an entire neighborhood in ashes.

Rendell inherited a city government with fiscal problems so massive that the state legislature established a fiscal oversight board to monitor it.

In a stunning turnaround chronicled in Buzz Bissinger's bestselling A Prayer for the City, Rendell cut a $250 million deficit; balanced the budget and oversaw five consecutive years of budget surpluses, reduced business and wage taxes, implemented new revenue-generating initiatives, and dramatically improved services to Philadelphia neighborhoods while cheerleading a wide range of projects to make the city more tourist friendly.

The successes led 2000 Democratic presidential candidate Al Gore to call him "America's Mayor" and resulted in his brief tenure as DNC chairman, but there was a dark underside: As noted, Rendell never pushed hard for Police Department reforms, the city schools continued to slide and racial tensions were exacerbated.

The latter cannot be laid at Rendell’s feet and he in fact worked tirelessly with white and black groups, at one point inviting Louis Farrakhan to speak at an ecumenical service called to try to heal racial and ethnic troubles in one of the city’s notoriously segregated neighborhoods.

Although he took only 10 out of 67 counties, the liberal Rendell won the 2002 gubernatorial primary without the state party, which had thrown its support behind the conservative and now U.S. Senator Bob Casey Jr. He coasted to election in the fall by attracting "Rendellicans,"” traditional Republican voters, many from suburban Philadelphia, who backed him due to his popularity as mayor -- in other words, the fact that he had made the city seem more attractive for them.

Rendell's major accomplishments as governor have been a prescription drug plan for older Pennsylvanians and approval of slot machine parlors to raise revenue and reduce taxes. His major failure has been to persuade the legislature to allow and other crime-heavy municipalities to pass their own gun laws.

It is ultimately Rendell’s "everyman" persona that has made him so popular.

In an annual ritual, Rendell would help clean municipal swimming pools and open the summer season by taking a portly and less than graceful first dive. He is a rabid Philadelphia Eagles fan and part of the panel of a Comcast Sportsnet post-game show during football season.

But it was Rendell's role in a 1989 Eagles game against the arch rival Dallas Cowboys at snow-covered Veterans Stadium for which he is best known by many people.

Legend has it that Rendell, who was DA at the time, threw a snowball at Cowboys coach Jimmy Johnson, but the truth his even wilder: He wagered $20 that the man sitting next to him couldn’t hit Johnson in the head. The man couldn't, but the incident . . . uh, snowballed and soon many fans joined in.