Oh Spring: Where Art Thou? 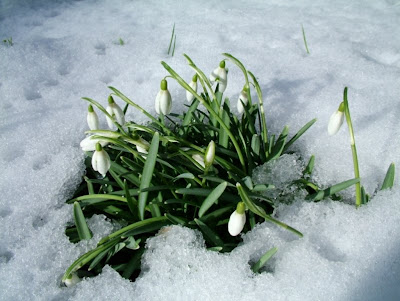 A MODERN HERBAL
By Chris Clark

I did not think that these dead pepper stems,
horehound and lemongrass, would trip me up
nor that the garlic spears, there fresh emerged
among the self-sown sorrel seedlings, flat
and pale beneath the canopy, would rend
me thus. (What was her name? She wrote
A Modern Herbal.) Frost-killed lemongrass
is growing once again from sheltered crowns.
The next hard freeze will kill it back again,
and then the next again: a palimpsest
of suffering, a pressing urgent green
endlessly battered and rebuffed, constrained
in limitless limits. After a time
a groove is worn, the loss itself constrained.

I did not think that this bunched grass, verdant
with winter rain and bright, would twine itself
around my passing ankle, throwing me.
Which flaw of mine was it this time? Which lack
of character, which failing, soul obscured
by cloud, scar-tissue seven layers deep,
the surface numb, insensible? Which fault
there hidden in my temperament strike-slipped?
Prone am I, breathing the pallid dust
where violets grew before the fall.