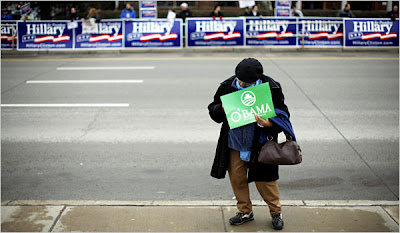 I introduced both Al Gore and John Kerry at their rallies. They knew all the policies, but people didn’t connect with them. You don’t get elected president if people don’t like you.

Hillary Clinton says she will not allow the "big boys" to "bully" her out of the race, and I think she is absolutely right.

Although it twigs me to no end that Clinton continues to play the gender card (when she or her surrogates are not playing race card), she has the right to soldier on despite the formidable obstacles standing between her and a presidential nomination that she long assumed would be hers for the taking.

So I will say this:

Let's let things play out through that all-important Pennsylvania primary on April 22. But anything less than a resounding Clinton victory should be the opportunity for a gracious if not overdue concession.

This is because Obama has a commanding lead in North Carolina and a growing lead in Indiana, the two states of consequence with post-Pennsylvania primaries. (Oh, and by the way, Obama actually won Texas.)

No more moving the goalposts, Hillary.

And no more whining about the meanies in the media, a few of whom have indeed been a bit over the top.

It will be time for Obama, Clinton and other top Dems to turn their guns on John McCain and the centerpiece of his campaign, The Forever War, like these good folks have.

Very likely not because the Hero of Bosnia is nothing if not a tenacious fighter who vows to string things out all the way to the convention where she will try to get the Michigan and Florida delegations seated even though that still won't give her the math she needs.

The upshot will be to allow McCain what is essentially an eight-month free ride, while Obama will have barely eight weeks to go after him.

And meanwhile, the Mister -- who is more responsible than even the Missus is for her dire straits -- will further cement his calls for party unity by stepping up his praise for McCain.

In any event, absent a spectacular showing in the Keystone State -- and I happen to believe that Obama may actually eke out a win -- there is only one reason beyond sheer ego to not quit -- because voters in North Carolina, Indiana and the eight other remaining primaries would be "disenfranchised" if Clinton bails.

Allow me to play my teenie-weenie violin because this argument is easily undercut:

The voters of these states also won't get to show their support for John Edwards and all of the other failed presidential race wannabes as did voters in many other primary states because the Democratic field was pared to two candidates relatively quickly.

As it is, the last several primaries have been rendered moot in previous election cycles, and Bill Clinton himself clinched the nomination in late March of 1992 despite his claim that the primary fight went on until June, so get over it.

Then there are those superdelegates, a goodly number of whom happen to believe that Clinton doesn't have a chance of prevailing but lack the cojones to tell her because of The Billary's well deserved reputation for revenge.

And how about those negatives? Clinton can't even pay her bills, while one recent poll shows that two out of three voters wouldn't open the door for her if she came knocking on a stormy night and another poll gives Obama a 10 percent lead nationally. As Senator Jay Rockefeller puts it, "You don’t get elected president if people don’t like you."

As this guy notes, all the dirt that her campaign is flinging is sticking to her.

Take the unending efforts of Clinton and her surrogates to continue to try to smear Obama over his association with a preacher who has said some unsavory things about America, most recently her remarks while she was pole dancing for Richard Mellon Scaife.

Obama has come clean about that relationship, got a nice bounce in the polls because of his candor and managed the feat of turning a nuanced 45-minute speech on race and religion into a wildly popular YouTube moment. Clinton, meanwhile, lied through her teeth for months about what really happened in Bosnia and only sort of fessed up when my buddy Will Bunch had her backed against the wall the other day. It turns out that Clinton and not Sinbad was the real comedian.

At least there is one guy who is showing some class. His thoughts:

"My attitude is that Senator Clinton can run as long as she wants,” Mr. Obama, of Illinois, said at a news conference in a high school gymnasium here. “Her name is on the ballot. She is a fierce and formidable opponent, and she obviously believes she would make the best nominee and the best president."

Photograph by Damon Winter/The New York Times
Posted by Shaun Mullen at 5:22 AM
Email ThisBlogThis!Share to TwitterShare to FacebookShare to Pinterest