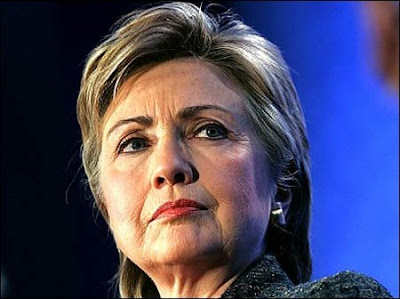 If all you care about is her winning the Democratic nomination no matter what it takes, then I suppose not. But if you're tired of the politics of the Age of Bush and Rove, including the secrecy and fear mongering, and are thirsting for leaders who take the high road, then it certainly does.

Some examples of where the win-at-all-costs campaign has chosen to go:

As former Democratic presidential wannabe Hart notes, chief among the unwritten rules in politics is that a candidate does not provide ammunition to the opposition party that can be used to hurt your own party's nominees.

And so Clinton's claim that only she and John McCain are qualified to lead the nation, besides being demonstrably false, is not only damaging to the man who happens to have the inside track on the nomination, but is damaging to the Democratic Party.

When her back is against the wall as it now is, Clinton tacks to right in quintessential Bill Clinton triangulation style and slams the oh-so-liberal Obama by using Republican talking points that bear no resemblance to the Democratic platform. In the unlikely event that she will be the nominee, expect her to tack back to the left and embrace that platform.

* Did you catch Clinton's response when she was asked on "60 Minutes" whether she believed that Obama is a Muslim?

As far as I know.

This sleazy equivocation is, of course, designed to keep the bogus issue of Obama's faith percolating and, like it or not Hillary fans, invites comparisons to sickos like Steve King.

* Exaggerations of the Clinton record. Foreign policy is a pungent example in light of her bloviations that she would be a whip-smart commander in chief whether the red phone rang at 3 a.m. -- when she would be up anyway waiting for Bill to come home -- or any other time of the day.

Recently asked to supply examples of her foreign policy expertise, asserted that she had helped bring peace to and negotiated with to open its border to Kosovar refugees.

Ahem. In the case of , all she did was take tea with women's peace groups, while Macedonian opened its border to refugees the day before arrived for a state visit.

* Playing by the rules only so long as they benefit her and demanding that the rules be changed when they don't.

Clinton had agreed not to count Florida primary votes or allow its Democratic delegation to be seated after the Democratic National Committee blackballed the state committee for moving up its primary. But now that she is scratching and clawing for every delegate she wants the rules changed: "I think that they want their votes counted," she harrumphs. "And you know a lot of people would be disenfranchised because of the timing and whatever the particular rules were."

Get that? Whatever the particular rules were.

The fallback would be Florida caucuses, but she isn't buying because she knows that she has gotten creamed in every state caucus but one, most recently on Saturday in Wyoming.

* Her continuing refusal to be forthcoming about the finances of she and her husband is a vivid example of her play-by-our-own-rules arrogance.

She has yet to offer a plausible explanation for not releasing income tax returns, something that Obama and McCain did long ago. Her campaign's comparison of Obama to independent prosecutor Kenneth Starr for pushing her on the issue is both disingenuous and puzzling since it was Starr's investigation that ultimately led to her husband's impeachment and you'd think reminders of questionable land deals and semen-stained dresses would be the last thing she would want to remind voters of.

* A candidate's surrogates should not be held to the same high standards as they should be, but when your chief surrogate is a former president who happens to be your husband, that's a whole different Bill of wax.

Which makes former President Clinton's refusal to release certain papers from his presidential library part of a larger issue: For all her blathering about experience, she and her husband are going to great lengths to keep chunks of evidence of that experience secret.

* * * * *
The ethicacy of destructive and dirty politics is in the eye of the beholder, of course, while negative advertising is not the turn-off that some people would like to think since certainly used it to good effect in the run-up to the and primaries. And what is negative to some beholders is not to others.

But taking the low road has consequences:

It reinforces the view of people like myself that she just isn't a very nice person. The election is not a popularity contest, but will her slash-and-burn tactics matter in November? You bet they will.

* It further contrasts the differences between her campaign and Obama's. No one would confuse the upstart from with Rebecca of Sunnybrook Farm, but he has set and maintained a far higher standard.

It could make a difference when superdelegate crunch time comes.

I wrote a while back and perhaps without as much conviction as I should have that Hillary Clinton reminded me of George Bush in unpleasant ways.

It was a good but perhaps overly glib line at the time. But with the experience of the last few months and the apprehension with which I view the coming months, she does indeed seem more and more like The Decider in a pants suit.