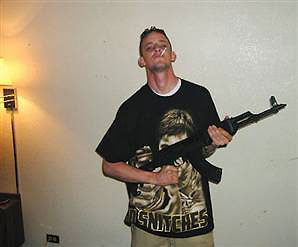 Steven Green is the poster boy-man for much of what is wrong about the war.

This petulant loner was allowed to enlist in the Army and was fast-tracked to the war zone despite a history of drug, alcohol and emotional problems and a petty criminal record back in , the titular home of the Bush family in oil patch country.

Green had been in for only a few weeks when he was found to have "homicidal ideations" by Army psychiatrists. Nevertheless, he was sent back into combat before finally snapping on , when he corralled some buddies and talked up the idea of raping Abeer Qassim Hamza, a pretty 15-year-old who lived with her family near the checkpoint in the so-called Triangle of Death south of that Green's unit had been manning without relief for days.

In fact, shadowy Sunni insurgents had driven the men of Bravo Company of the 1st Battalion of the 502nd Infantry Regiment, 101st Airborne Division, to near the breaking point. They seldom engaged in face-to-face combat, but there was gunfire and rocket-propelled grenade attacks almost daily and Green's comrades were dying at the rate of at least one a week during this pre-Surge strategy period.

Bravo Company had lost eight men alone and would lose several more in the coming months as a direct result of Green's heinous actions.

After getting liquored up on black market Iraqi whiskey, a violation of war-zone policy, Green and one of his three confederates changed into into Iraqi civilian clothing and made arrangements for a buddy to monitor the radio at the checkpoint so they could go "kill and hurt a lot of Iraqis," as one confederate later told an investigator.

Once at Abeer's house, Green herded her father, mother and Hadil, her 7-year-old sister, into a bedroom. Abeer's brothers, Ahmad and Muhammad, were at school.

Green then turned on Abeer, whom officials initially claimed was 20 or 25. As if that justified what happened next.

Abeer's dressing gown and bra were torn from her body and her legs tied. Green and two other soldiers then took turns raping her. By the time they had finished, blood was flowing from her vagina. Green then shot Abeer in the head two or three times, threw a blanket over her torso and set the family's bodies afire in a crude effort to cover up the atrocity.

Back at the checkpoint, Green burned his blood-drenched clothing and swore everyone to secrecy.

Today 22-year-old Steven Green whiles away the days in a federal lockup in while lawyers fight over the question of whether he should be tried as a civilian.

Although the cover-up of the rape-murders would not be revealed until June 2006, the behavior of the private first class had become so problematic by May that the Army sent him home on the grounds that he had an "anti-social personality disorder," but nevertheless gave him an honorable discharge.

Green was technically separated, but not retired, from the Army when rape and murder charges were filed against him in July 2006. This would put him beyond the reach of a military court unless higher ups intervened, which they did not.

Iraqi authorities demanded to no effect that Green be returned to and tried, but the has been historically protective of servicemen stationed overseas and with few exceptions (none in ), they have been protected against prosecution in local courts.

Green's lawyers, in a motion filed last Friday night, argue that he should have been tried under the military criminal-justice system because the acts occurred while he was enlisted, he told his commanding officer twice about them, and therefore his discharge was thus not valid.

In other words, the Army wanted to wash its hands of the whole sordid mess and should not be allowed to do so.

The defense motion is predicated on the probability that Green would get the death penalty if convicted after a civilian trial now scheduled for April 2009.

Green's confederates and a fourth soldier are serving sentenced after their cases were heard in a military court.

Three men received prison sentences of 110, 100 and 90 years after being found guilty or pleading guilty to participating in the attack. The soldier who covered for them at the checkpoint was sentenced to 27 months after pleading guilty.

Further complicating the case is that Green tried to re-enlist in an effort to be shielded from the civilian court system.

The federal prosecutors assigned to the case counter that the federal death penalty process and methods are constitutional and procedurally sound and assert that the evidence warrants seeking a death sentence.

What that Abeer Qassim Hamza had choices like Steven Green. But alas, she is still dead.

As awful as this is, thanks for posting it. Anti-social means sociopath and sociopath means only a few things - one of them is, no conscience. That should have been the end of it. How much you want to be someone said it would be better for him to kill over there than kill here?

Organized violence, whether military or police, always provides opportunities for psychos to exercise their little quirks. The US has always had to deal with it on our overseas bases, such as Okinawa. It causes an outsized problem with local relations. You always wonder how they slip through the cracks. The consequences are tragic and embarrassing to the nation. It is one of the many costs of war, which I would characterize as the necessity of fighting evil.

I think you are right to imply that this is a result of our eagerness to recruit because of the pressure on the Army. If we were willing to fund a larger standing army and accord the soldiers the kind of respect that they deserve, then the military could be more selective and guys like this would have a harder time getting through the filters. Then again, it doesn't mean he would have been harmless back home.

Maj. Nidal Malik Hasan killed 12 and injured 31, while shouting "Allah Akbar". Another one that slipped thru the cracks....