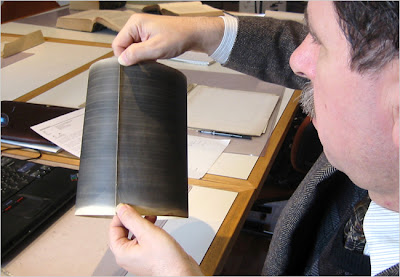 For more than a century, since he captured the spoken words "Mary had a little lamb" on a sheet of tinfoil, Thomas Edison has been considered the father of recorded sound. But researchers say they have unearthed a recording of the human voice, made by a little-known Frenchman, that predates Edison's invention of the phonograph by nearly two decades.

The 10-second recording of a singer crooning the folk song "Au Clair de la Lune" was discovered earlier this month in an archive in Paris by a group of American audio historians. It was made, the researchers say, on April 9, 1860, on a phonautograph, a machine designed to record sounds visually, not to play them back. But the phonautograph recording, or phonautogram, was made playable — converted from squiggles on paper to sound — by scientists at the Lawrence Berkeley National Laboratory in Berkeley, Calif.

This shouldn’t be polarizing, but it is. Energy conservation has been suffused with a moral quality these days; instead of being a sensible reaction to higher prices and foreign dependence, it is a sign of virtue. It was thus in the 70s, and now it’s back. That’s why your choice of light bulb says what kind of a person you are. Fluorescent? Or evil?

People who have big bellies in their 40s are much more likely to get Alzheimer's and other forms of dementia in their 70s, according to new research that links the middle-aged spread to a fading mind for the first time.

The study of more than 6,000 people found that the more fat they had in their guts in their early to mid-40s, the greater their chances of becoming forgetful and confused and showing other signs of senility as they aged.

The worn parachute that children found while playing on their family's property in rural southwestern Washington this month may be the one that D. B. Cooper used on that mysterious night in 1971 when he carried out what the authorities call the only unsolved hijacking in United States history.

Then again, maybe not.

Many American women, until they get pregnant, have no idea that they are entitled to no paid leave under current law. Indeed, a study from last year found that of 168 nations worldwide, the is one of only four whose government doesn't require employers to provide paid maternity leave. The others are , and .

[A] JPMorgan Chase employee distributed a memo called "Zippy Cheats & Tricks," which reads like a tipsheet for beating a video game. It advises employees at the banking company how they can help mortgage brokers jigger the in-house system, called "Zippy," that evaluates loan applications. Overstate the borrower's income, it suggests. Don't mention that some borrowers are relying on gifts to repay their loans. Inflate assets. "Never fear," the memo reads. "Zippy can be adjusted . . . "

What, really, is Mrs. Clinton doing? She is having the worst case of cognitive dissonance in the history of modern politics. She cannot come up with a credible, realistic path to the nomination. She can't trace the line from "this moment's difficulties" to "my triumphant end." But she cannot admit to herself that she can lose. Because don't lose. She can't figure out how to win, and she can't accept the idea of not winning. She cannot accept that this nobody from nowhere could have beaten her, quietly and silently, every day. (She cannot accept that she still doesn't know how he did it!)