Iraq I: Is All Hell About To Break Loose? 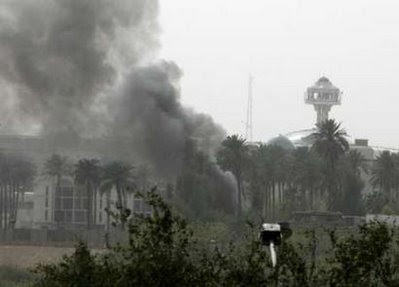 UPDATE
The seven-month ceasefire brokered by anti-American radical Shiite cleric Moqtada al-Sadr is, for all intents and purposes, off. Times Online reports that neighborhood after neighborhood in Baghdad is being taken by milita gunmen, some with heavy fighting and others without a shot being fired.

Meanwhile, The Washington Post reports that U.S. troops have taken the lead in fighting in the capital.

* * * * *
One, two or three years (pick one) after the Iraqi army was ready to stand up so that U.S. troops could stand down, Shiite militamen with comparatively meager weaponry and far fewer logistical resources still have the upper hand after three days of ferocious fighting in the key southeastern city of Basra.

Napoleon, as Daniel reminds us, famously remarked that "If you set out to take Vienna, take Vienna!"

Methinks there are three reasons why Prime Minister Nouri al-Maliki's gamble is backfiring:

* White House and Pentagon claims that the Iraqi army has finally gotten its act together as usual have no basis in reality.

* As Fester notes here, even with tactical air support from the and , the Iraqi force seems to be a little on the thin side.

And most importantly, the militamen are fighting for their very existence while Iraqi boots are fighting their own countrymen, in many cases members of their own religious sect, for the political gain of the unpopular Al-Maliki.

Then there is Iran's machinations in all of this, which range from big and evil to paltry and passive depending upon your view of the Tehran regime.

Mine is that the ayatollahs find themselves in the difficult position of having to both support and rein in radical anti-American Shiite cleric Moqtada al-Sadr, who is the key player in this drama, not the prime minister and certainly not George Bush, who for all his bloviating has essentially tied his own hands because of years of wrongheaded policy making that determinedly put politics ahead of more practical concerns.

As it was, the president packed an extraordinary number of misstatements into his speech yesterday before yet another "safe" audience, chief among them that it "makes no sense" to divert troops from Iraq for the real War on Terror.

The question of the hour is what happens next. The answer is nobody knows, but here are a few scenarios:

* All hell breaks loose as U.S. ground troops are further drawn into the fighting, which has already taken out one of Iraq's two major oil pipelines as it has spread from Basra and Baghdad to several other cities. As it is, they are now battling militants in and around the Sadr City slum in Baghdad.

* All hell breaks loose as Al-Sadr, who enjoys far more popularity than the prime minister among Shiites, calls for an end to the seven-month ceasefire against U.S. troops.

* All hell breaks loose as Al-Maliki's already tenuous political situation is further undermined by the escalating violence and his ineffectual army and security forces.

My guess is that none of the above will happen in the short term because it may be in the best interests of Al-Sadr and Al-Maliki, who has extended by 10 days the deadline for militias to take bribes in return for turning in their weapons, to negotiate some sort of truce.

That, however, would only delay the day of reckoning that was bound to come after the prime minister failed to even make an effort to fulfill his end of the Surge bargain.

Posted by Shaun Mullen at 8:30 AM
Email ThisBlogThis!Share to TwitterShare to FacebookShare to Pinterest