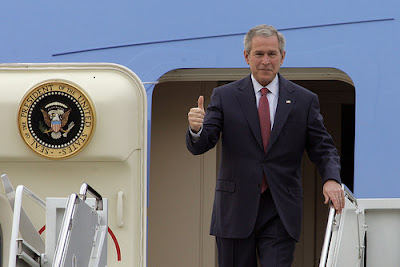 THERE IS NO RULE BOOK FOR AN ECONOMIC CRISIS.

-- Economist Douglas W. Elmendorf
Sentient Americans long ago became accustomed to the gap between George Bush's words and reality. But when the president spoke to the Economic Club in Manhattan the other day his understanding of arguably the biggest economic crisis since the Crash of 1929 was so shallow, his misrepresentation of the causes so complete and his solutions so inadequate that I wanted to cry.

Few of those thinking Americans will miss hearing the phony twang of a man so able to lie and so unable to lead when he commences the search for his squandered legacy among the scrub brush at his ranch 10 months hence.

But when it comes to that ongoing economic train wreck – and believe me, there is a long way to go before the last car careens off the cliff and crashes into Recession Ravine despite the Federal Reserve's panicked actions yesterday to stave off further chaos -- it really doesn't matter.

This is because no one in a position of authority, let alone any of Bush's possible successors as president, seems willing to acknowledge let alone confront the demons that got the economy into such a mess in the first place, so throwing money at the toxic waste dump that is Wall Street becomes a substitute for real action. Kinda like those $600 economic stimulus taxpayer lollipops.

In fairness, the president inherited some of the time bombs that are exploding on the economic train tracks. That so noted, the befuddlement of he and his top economic advisors would be hilarious if it was't so bloody pathetic.

Bush is probably the last person on earth with a Harvard MBA to not acknowledge the is in recession, but he did say that "Our economy obviously is going through a tough time."

His cure? Don't do anything major except keep his tax cuts for the rich on the books after he leaves office: "The temptation of is to say that anything short of a massive government intervention in the housing market amounts to inaction. I strongly disagree with that sentiment. I believe there ought to be action, but I'm deeply concerned about law and regulation that will make it harder for the markets to recover."

Meanwhile, feckless Fed chief Ben Bernanke, who makes predecessor Alan Greenspan look like a genius, all but contradicted the president the very same morning in pledging a panoply of new government regulations to limit the impact of the recess . . . er, whatever it is.

While Bush and Bernanke were bloviating, there was an old-fashioned bank run on Bear Stearns.

Now understand that Bear Stearns is not an old-fashioned bank, but rather one of those financial institutions -- in this case an investment bank -- that was given carte blanche by the Clinton White House (no doubt with the hands-on help of the way experienced Hillary) as well as Congress to rewrite lending rules anyway they saw fit without the encumbrance of government oversight.

Only three days earlier, Bear Stearns claimed it was infection free from all the bad loans. But that was a big fat fib. After all, two of its own hedge funds had been among the first to go kaplooey, and as soon as the run began it had to acknowledge it did not have the liquidity to stay afloat.

Because Bear Stearns has played in the regulation-lite sandbox, its customers do not have the depositor protection that traditional commercial banks have enjoyed since FDR halted the bank runs of the Great Depression through government guarantees.

In an historically precious but otherwise pitiful moment, Bear Stearns was forced to beg Bernanke's Federal Reserve for a lifeline. This is because it cannot borrow directly from the Fed because it's not a real bank, so it had to enlist JPMorgan Chase.

The Fed obliged yesterday, approving a $30 million credit line to engineer a Bear Stearns takeover by JPMorgan Chase and announcing an open-ended lending program for FTD sufferers to try to avoid a systemic meltdown in the financial markets.

JPMorgan Chase agreed to pay a mere $2 a share to buy all of Bear Stearns — an extraordinary bargain that represents less than one-tenth the 85-year-old firm's market price. Oh, and Bear Stearns threw in its headquarters skyscraper for good measure.

While not the housing-market intervention that the president is resisting, the Fed action was massive in its own right and all the more so coming on the heals of a $200 billion loan program it already had announced last week.

So while millions of homeowners continue to suffer, Uncle Sam has ridden to the rescue of the gray-flannel suits at the largest investment banks and will now hold as collateral a wide variety of investments including mortgage-backed securities.

These securities, of course, are now nearly worthless because of the profligate (and I daresay borderline criminal) behavior of Wall Street bigs, which caused the FTD epidemic in the first place, although the actions certainly give new meaning to what former Fed chairman Greenspan called "market flexibility."

No matter, a full-fledged bailout akin to the massive savings and loan rescue of the 1980s can't be far behind.

You see, the Wall Street perps won't have to make good on all of the money they squandered as they snug into their golden parachutes. But somebody will have to do it, so get ready to open your wallets, Mr. and Mrs. Taxpayer.