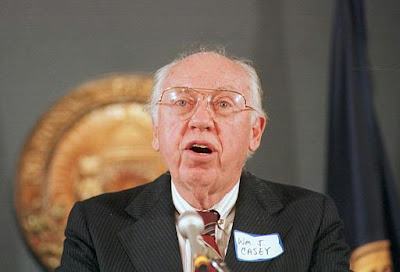 Bending the truth in the service of intelligence gathering is as old as spy craft itself, and the history of the CIA right into the new millennium is littered with such instances. But it is worth noting on the 95th anniversary of William J. Casey's birth that some of this deeply troubled agency's most intractable problems can be traced to this man who was so addicted to lying that he rarely told the truth to anyone, especially the people who needed to know it like the president of the .

Casey was a piece of work, an old-time Wall Street operator who had gotten rich selling tax-shelter strategies by "by bending the rules to the breaking point," as Tim Weiner put it in Legacy of Ashes, his definitive history of the CIA.

As it was, Casey was to break all the rules as CIA director after Ronald Reagan took office in 1981.

He had a massive ego, but no experience in intelligence, and insiders from Gerald Ford to George H.W. Bush, who was CIA director under Ford, were appalled at the choice of a man whose only qualification was that he had raised heaps of cash for the president.

Casey's first move was to replace agency veterans with political hacks. His second was to approve covert operations in places that arguably did not represent serious threats to the U.S., among them Central America where he installed a pal as the head of the CIA's clandestine service for the region who spoke no Spanish and knew next to nothing about communist-leaning Nicaragua and the countries suddenly under his watch.

Casey lied to the notably uncurious Reagan from the outset about what the CIA was up to.

And he lied to Congress, which nevertheless gave him hundreds of millions of dollars to hire 2,000 new covert officers who were almost to a man clueless about their responsibilities and were sent out into the field with little or no direction from on high.

Exhibit A in this regard was Lebanon, where a succession of Americans were taken hostage in the early 1980s – including CIA station chief Bill Buckley, who was to die in Hezbollah's chains -- by terror groups that the agency knew little or nothing about.

The debacle and the CIA's covert operations in Nicaragua collided in the Iran-Contra affair, a scheme hatched by Oliver North and approved by Casey through which weapons were sold to the Contra rebels in via a covert network that included intermediaries in , of all places.

Reagan fired the Marine lieutenant colonel after the illegal sales became public in 1986. In a scene that still makes conservatives all weepy, North defended his conduct before a televised Congressional hearing. Although he was indicted and convicted on several felony counts, including the destruction of documents on his orders by Fawn Hall, his secretary, he never saw the inside of a prison cell and all charges were dismissed because he had been immunized by Congress before spilling his guts.

As Weiner writes, Casey convened a conference of American intelligence bosses from the CIA, State Department and Pentagon as the Iran-Contra scandal was about to break.

"Feel very good about our community having worked together for six years more effectively than most of our government without any significant failures," Casey's talking points read. "No scandal and a good many solid successes."

The director had a seizure a few weeks later and was unable to do any more damage. When he died in May 1987 at age 74, his own bishop denounced him from the pulpit at his funeral.

Although Casey had doubled the size of the CIA and launched secret operations around the world, his traitorous legacy of lies left it a far weaker organization that has never recovered.

I read the "Legacy of Ashes" and came away with two thoughts.
One, given the innumerable botched stupid and naive missions that resulted in dead US native or foreign agents, given the paucity of successes and given that hosting an American Embassy means inviting insurrectionist spooks* into your country: If American foreign policy had consisted primarily of virtuous acts of aid and generosity we and much of the world would be quantum times safer.
Two, when the conservative elements in the political spectrum begin to quash liberality in the halls of learning, particularly through the use of force, freedom is in very real danger.