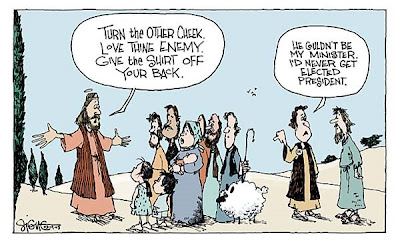 One of the major strains of reaction to Barack Obama's "More Perfect Union" speech is that those who are not persuaded by it are therefore racist or at least unreasoning fools. Poisoning the well in this manner may be an effective rhetorical device but it undercuts the very message of the speech, which is that race remains a very complicated issue in American culture and that we must tolerate a wide range of expressions on the subject.

Never do I want to hear again from my conservative friends about how brilliant capitalists are, how much they deserve their seven-figure salaries and how government should keep its hands off the private economy.

<>The Wall Street titans have turned into a bunch of welfare clients. They are desperate to be bailed out by government from their own incompetence, and from the deregulatory regime for which they lobbied so hard. They have lost "confidence" in each other, you see, because none of these oh-so-wise captains of the universe have any idea what kinds of devalued securities sit in one another's portfolios.

I'm just wondering. Which of these affiliations is worse: Barack Obama and his pastor . . . or John McCain and his president?

Bush's penchant, over the past few years, has been to characterize all anti-American combatants in Iraq as "al Qaeda" - even though, as has long been documented, only a fraction of those combatants have any ties to Osama bin Laden's organization.

McCain worships in the same church, where fact-averse sermons have become commonplace these past eight years. Yesterday in Iraq, McCain stated: "Well, it's common knowledge, and has been reported in the media, that al Qaeda is going back into Iran and receiving training, and are coming back into Iraq from Iran. That's well known."

OK, here we go, just as we always do with Bush: It's actually not common knowledge, it has not been reported in the media, and it is not well known. Because McCain's whole statement was false.

I've been thinking most of today about Barack Obama's speech on race and American society; while we’ve tried to avoid too much horserace type commentary here in the last couple of months, I don’t think that this fits well under horse race politics. Before the speech, if you’d asked me which candidate I'd support if I could vote, I'd have said Obama. After the speech, it's quite different.

I've lived in the US for the last four years as a permanent resident, and been quite happy here. Hearing Obama speak made me feel for the first time that I genuinely want to become a citizen of this country and a part of the larger project that he talked about, regardless of specific disagreements I might have. You hear a lot of guff in politicians' speeches about how great America is; Obama seemed to me to be challenging America to be great, which is a very different and much riskier thing, as well as something I find much more compelling and attractive.

-- HENRY
Housing starts fell 0.6% in February and permits for new construction plunged 7.8% to the lowest level in 16 years. The housing report showed February starts were 28.4% less than the level of February 2007.

Given that the enormous overhang in inventory is a huge part of the problem, this is, perversely good news.

Counterfactual conditionals are always problematic, but in all likelihood . . . if the . were not in , Mr. AQI [Al Qaeda ] would be back in his taxi in or Jedda. Were it not for Abu Ghraib -- which, of course, never would have happened had we not invaded -- Mr. AQI would never have felt that it was his religious duty to kill Americans. And were it not for the war, thousands of Americans and possibly hundreds of thousands of Iraqis would be alive, right now, and all without a propaganda windfall that spikes terrorist recruitment for the extremist lurking around the mosque trying to generate new Mr. AQIs. And what is true of our foreign-born Mr. AQI is all the more true of the perhaps 95 percent of AQI that's Iraqi Sunni. Not one of them would have any reason to be a member of AQI if George Bush did not give him one.

A German fighter ace has just learned that one of his 28 wartime "kills" was his favourite author. Messerschmidt pilot Horst Rippert, 88, said he would have held his fire if he had known the man flying the Lightning fighter was renowned French novelist Antoine de Saint-Exupery.

One problem with Hillary Clinton's strategy of praising John McCain's national security experience to diminish Barack Obama's credentials is that, if she ends up facing McCain, her ability to attack will be much constrained. We know with almost perfect certainty that the media won't call McCain on foreign policy ignorance. But given that Clinton spent the last few months praising his credentials on the issue, it's going to be rather hard for her to do it.

If she attacks him in a debate, he can just give a Reaganesque chuckle and say, "well Senator Clinton, a few months ago, when you were running against Senator Obama, you were praising my experience and judgment. Now you're attacking it. But I haven't changed." It's all the worse because Clinton could have spent the last few months getting coverage for saying that McCain didn't know what he was talking about, Obama didn't know what he was talking about, and that's why the country needed Hillary Clinton. That would have hurt McCain and preserved her freedom of movement. As it is, how can you blame the media for accepting McCain's aura of experience if even Hillary Clinton is granting him that advantage?

John McCain's captivity gives him special Patriotic status.
That having been said, his large command experience is exactly the same as his Democratic opponents: none!
He has fits of integrity and is a great 'hail fellow well met' character but, but, he is universally accepted as lacking the brilliance of either Hillary or Barack and G Damn it, we just tried having a pleasant middle class brain in the White House and times are too complicated to repeat that disastrous experiment. Duh!