Iraq: The Check Is Not In The Mail 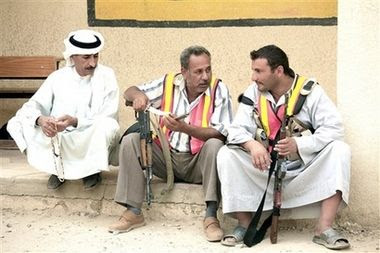 MEMBERS OF THE ARAB JABOUR AWAKENING
The Achilles heel of the vaunted "Awakening" program in which Iraqi insurgents renounce their evil ways and cozy up to the is that it is based on bribery and not loyalty.

Leading members of the 80,000-strong Sahwa, or Awakening, councils are said to be royally pissed off because they say the U.S. military used them to clear Al Qaeda militants from dangerous areas and then abandoned them.

The Guardian reports that they say they will stop fighting unless payment of their $10 a day wage are resumed. The fighters are accusing the US military of using them to clear al-Qaida militants from dangerous areas and then abandoning them.

A telephone survey found that out of 49 Sahwa councils four with more than 1,400 men have already quit, 38 are threatening to go on strike and two already have.


Improved security has been attributed to a combination of the Surge, the truce observed by Moqtada al-Sadr's Mahdi army, but the most significant factor has been the effectiveness and commitment of the councils, according to most analysts.

In his speech marking the fifth anniversary of the war, President Bush highlighted the significance of what he called "the first large-scale Arab uprising against Osama bin Laden," saying that Iraq "has become the place where Arabs joined with Americans to drive al-Qaida out."

But dozens of phone calls by The Guardian's GuardianFilms affiliate to Sahwa leaders reveal bitterness and anger.

Said Abu Abdul-Aziz, head of the council in Abu Ghraib, where 500 men already have quit:

"We know the Americans are using us to do their dirty work and kill off the resistance for them and then we get nothing for it. The Americans got what they wanted. We purged al-Qaida for them and now people are saying why should we have any more deaths for the Americans. They have given us nothing."

Posted by Shaun Mullen at 9:49 AM
Email ThisBlogThis!Share to TwitterShare to FacebookShare to Pinterest