Yet Another Forever War Anniversary: OBL, GWB, The Politics of Fear & Much More 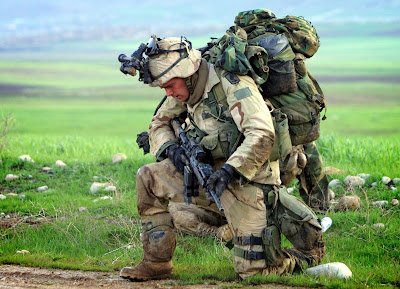 Having run through a series of rationales for the Iraq war that would have daunted a less arrogant man, George Bush finally settled on a real keeper in the fifth year of the Forever War: It was necessary in order to bring down the very terrorists who launched the 9/11 attacks.

While it took some time to debunk the earlier rationales, this one was an instant classic, a whopper so big and transparently false that it beggared belief.

This, of course, was because the Al Qaeda insurgents who have bedeviled the star-crossed American occupation were a product of the occupation itself and had only a tangential connection to Osama bin Laden and the men who flew jetliners into the World Trade Center, Pentagon and a farm field in Western Pennsylvania.

But we can thank the president for one thing: The phony connection between Al Qaeda in Iraq and 9/11 invites another and one that I offer with circumspection as we slouch into the sixth year of the war.

What Bin Laden was not able to do on that fateful morning and in the years since, Bush has done for him in some respects.

At first glance, that statement may seem shockingly inapt until you consider:

* Bush's ability to play on America's fears far better than The Bearded One ever could.

* Bush's pathalogical inability to level with Americans has further undermined their faith in goverment.

* Bush's war has further destabilized arguably the most volatile region in the world.

* And Bush's actions, including advocating torture and casting aside international treaties and conventions, have brought great shame on America.

A RIDDLE SOLVED
Yes, that scarable American public can be fickle, but it has puzzled me as to why there has been a modest uptick in support for the war.

After all, there is nothing to cheer about beyond a welcome downtick in U.S. and civilian casualties. The cold reality is that despite the military success of the Surge, the Iraqi government has not even begun to fulfill its part of the deal.

The answer to the puzzle may lie in declining news media coverage.

According to a survey by the Pew Center for the People and the Press, public awareness of the number of American military fatalities in Iraq has declined sharply since last August. Today, just 28 percent of adults are able to say that nearly 4,000 of their countryfolk have died in the war, while 54 percent correctly identified the fatality level in August 2007 when media coverage was running at a fever pitch.

TO MARKET, TO MARKET
Presumptive Republican presidential nominee John McCain was back in Iraq the other day, but he did not revisit the open-air Shorja market in Baghdad, the scene of his infamous April Fools Day 2007 photo-op.

McCain had declared that he wanted to prove to Americans that they were "not getting the full picture" of what was going on in Iraq -- all the while accompanied by 100 soldiers with three Blackhawk helicopters and two Apache gunships hovering ovehead.

Well picture this: McCain, with superhawk Joe Lieberman fawningly at his side, wanted to revisit Shorja but was told that it is now too unsafe even for VIPs with heavily armed escorts.

A CHANGE OF HEART FOR PONTIUS PILATE?
There is much to loath about the neoconservative brain trust, the puppet masters that put Bush up to the Iraq war, but there is a place in a special Hell reserved for Richard Perle. As Bush's Defense Policy Board chief, Perle loudly proclaimed that there was a link between Saddam Hussein and Osama bin Laden after the 9/11 attacks, worked feverishly to justify the invasion, called "traitorous" anyone in Congress who dared question him, and "incompetent" the military commanders who said there weren't enough troops to do the job right.

What made Perle particularly loathsome is that he had no regrets about his role in the greatest foreign policy disaster in American history, but now a man whom I compared to Pontius Pilate has second thoughts.

Writing in a New York Times op-ed round-up, Pearle disses Colin Powell, then secretary of State, Condoleezza Rice, then national security advisor, and George Tenet, then CIA director for reversing a plan to turn Iraq over to the Iraqis as soon as possible after Baghdad had been secured and says he "badly estimated the administrations capacity to mess things up."

Got that? Everything was going swimmingly when Perle was helping call the shots, but then Poof! the war went to crap.


STUCK IN THE IRAQ LOOP
So the Surge has been a success as far as Bush and McCain are concerned, yet the U.S. does not dare risk withdrawing troops.

Fareed Zakaria, writing in Newsweek, cuts through the crap to explain why:

"It's possible that the uptick in violence, the tensions in Diyala and other such signs are just twists and turns in Iraq's troubled path. That is probably the way they will be read in the current atmosphere of self-congratulation in Washington. But they might also be signs that the architects of the surge—chiefly General Petraeus—were right all along when they said that the purpose of the military deployment was to buy time for Iraqis to make political progress. One year into the surge, five years into the war, those metrics have not improved. That's why American troops remain stuck 'in the loop' in Iraq."