Collapsing Economy: It's the Greed, Stupid 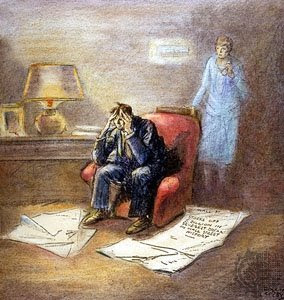 When the dot.com bubble burst with the coming of the new millennium, the reasons were pretty obvious – a combination of ridiculously high stock prices, rampant speculation, zillions of dollars in available venture capital and giving the finger to traditional business models that sent many a company and investor on a binge that a drunken sailor would envy.

What's going on now as the effects of the subprime mortgage and hedge fund disasters ripple through the economy like the venom from a snake bite is not terribly dissimilar from the dot.com kaboom in some respects, but very different in another:

While greed was an element there, greed is the element here and virtually no one in a position of responsibility is fessing up to that.

The consequences of that myopia are beginning to border on the catastrophic:

* The latest job report is the worst in five years and the decline in the jobless rate no cause for joy since it reflects people giving up looking for work.

* Household equity is at an all-time low.

* The number of homes entering foreclosure hit a record high in the fourth quarter of last year.

* An increasing number of homeowners are simply abandoning their digs and walking away from their mortgages.

* Consumer debt continues to grow by leaps and bounds as people max out their credit cards in order to keep their heads above water. Another $6.9 billion in debt was added in January, bringing the total to robust $2.52 trillion.

* Banks that loaned money to hedge funds and other big risk-takers are freaking out and want some of it back.

* Oil prices blasted past their all-time, adjusted-for-inflation high earlier in the week and continue to climb.

* Some major economic players remain in denial. J.P. Morgan has continued to insist that the economy was growing despite numerous indicators that it was sliding into or was already into recession.

To give credit where it's due, greed as a business principle did not begin with the election of George Bush. Furthermore, some economic issues such as trying to control the price of oil are beyond the grasp of any president. Furthermore furthermore, many consumers have made profligate decisions in buying houses that they could not afford and not managing their money carefully.

But if Bush has shown anything it's that he's a sucky leader and adamantly refuses to acknowledge anything that portray him in a negative light, including uttering the word . . . well, you know the word I'm talking about.

As it is, all we get from The Decider and Ben Bernanke are $600 checks (if we make enough to pay taxes) and platitudes.

The dot.com bubble was caused by incorrect conventional wisdom, that the technological advantages of Moore's Law could sustain a competitive advantage for tech companies. As Warren Buffett told us, only a genuine and sustainable competitive single-company advantage can provide outsized profits, and all these tech companies were inundated by close competitors. Irrational Exuberance is the correct diagnosis. Bubble chasing is the result.

The housing credit crunch was also a bubble, but I believe it is caused by a built-in systemic problem in the tax code. The fact that mortgage interest is subsidized by the IRS causes people to overinvest in housing. The goal is often to pay no taxes by buying a house that stretches your finances to the absolute limit. This has two obvious downsides. First, it makes the borrowers very vulnerable to market vagaries, and second, it artificially accelerates the housing price increases. After the economy recovers and incorporates the write downs, this boom cycle will only repeat itself. The tax subsidy almost guarantees it. Not even the AMT eliminates the mortgage interest deduction.