A Nation Obsessed Over the Wrong Drugs 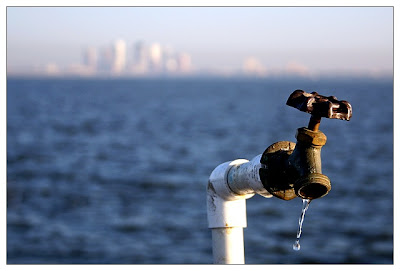 There is a confluence between our national mania for drug testing and the news that as many as 41 million Americans are drinking from water supplies tainted with traces of pharmaceuticals ranging from anti-seizure medications to mood alterers.

Americans are obsessed drugs, but the wrong kind of drugs for the wrong reasons, and that's not the half of it.

I understand the rationale behind drug testing nuclear power plant operators, to name an obvious example, but why are registered nurses and many other professionals required to regularly pee in a cup in order to be gainfully employed?

Because we get a false sense of security believing that Uncle Leo will get better hospital care if Nurse Nancy didn't have a puff of marijuana the night before.

The trouble with this "logic" is that it is far more likely that Nurse Nancy is stressed out from too little staffing and too much mandatory overtime and has medicated herself to a farethewell with sleeping aids, anti-depressants and stimulants to get through the day that may not be caught in a drug screen, and even if they are would not necessarily raise concern that she's going off the deep end.

And that these very pharmaceuticals are turning up in increasing quantities in those municipal water supplies. Not at harmful levels for the time being, but the long-term consequences are disturbing.

The reason for this crisis in the making is that Americans are taking ungodly amounts of drugs and peeing or flushing away more and more of them in unmetabolized or unused form.

Over the last five years, the number of U.S. prescriptions rose a whopping 12 percent to a record 3.7 billion scripts, while non-prescription drug purchases held steady at about 3.3 billion.

These extraordinary numbers should come as no surprise to anyone who watches television with any regularity. Drug advertisements have muscled aside beer and car ads for prime-time primacy and the message is loud and clear -- whatever ails you, from erectile dysfunction to the blues, we've got a pill or tablet to make you hard and happy.

This brings me to the national policy on perhaps the most benign drug that Mother Nature has to offer. That, of course, is marijuana.

Whether it's Nurse Nancy or your teenaged son, their chances of being arrested for taking a puff are far greater than falling over a little old lady in a supermarket parking lot because they're stupid on Placidil.

In fact, nearly 90 percent of all marijuana arrests are for simple possession, not sale or manufacture, and those arrests exceed arrests for all violent crimes combined.

Meanwhile, your tax dollars are hard at work at federal agencies that do a half-assed job of vetting powerful prescription drugs but claim that all marijuana is bad all the time. This despite study after study that shows smoked marijuana can save lives because it eases nausea and vomiting from chemotherapy and other crippling treatments, and helps mitigate the effects of AIDS wasting and glaucoma.

Indeed. But how to undo the mess?

I'm curious. Does the Drug War cost more than the War in Iraq?

The Drug War may just be an excuse to lock up young black men. I can't think of any other reason for it. We keep breaking records on incarceration rates. I believe we have locked up a greater percentage of our citizens than any other country.

The main reason you drug-test nurses is to keep them out of the meds supply. The injustice here is that they don't test doctors, who are just as likely, if not more so, to indulge.