Why Toyota Rules the Automotive World 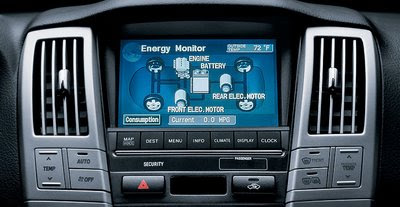 DRIVER INTERFACE ON THE LEXUS 400 HYBRID

The Dear Friend & Conscience is a good example of why Toyota has just passed General Motors as the world's No. 1 manufacturer of cars and trucks.

The DF&C drove a GMC Jimmy when we started hanging out together. Through pampering and frequent oil changes, she was able to nurse 350,000 miles out of the beast before it quit, but the experience was daunting. Even when new, the Jimmy shook, coughed and rattled, was rough shifting, had backbreaking seats and a problematic four wheel drive system. It was delivered from the factory in white over red mufti, but by the time it went away there was almost as much orange from rust.

The DF&C looked at new Jimmys, but they seemed to be little more than prettied up versions of her old truck. She ended up buying a Lexus RX300.

The Toyota-built Lexus is closing in on 200,000 miles. There is the occasional rattle now, but it runs and shifts as smoothly as the day the dealer delivered it along with a cut crystal vase full of long-stem roses. One of the fuel pumps quit at 140,000 miles, but it has otherwise been trouble free. The DF&C is given a loaner car whenever maintenance is scheduled, most recently a spanking new RX400 Hybrid.

Sooner or later – and the latter is more likely – the DF&C will need to replace her Lexus. Care to guess what she'll buy?

There are many reasons for Toyota's ascendancy, including Japan's restrictive trade policies and enormous shifts in the global economy, but the bottom line is simple:

General Motors forgot how to build good cars while Toyota invented a whole new way of doing so.

As well read as I am about the automotive industry, I still can't quite figure out Toyota's mojo, but whatever it is, the result is a killer combination of quality, reliability and technological leadership.

That RX400 hybrid is a great example of all three.

It is a thing of beauty from any angle (a secondary consideration to be sure) and my few minor complaints about the DF&C's older model -- not enough seat bolster, a flimsy glovebox door and a clunky rear hatch handle -- have been ironed out. The 4-liter gasoline engine-electric motor system operated flawlessly during the four days we had the RX400, switching to battery power at idle and low speeds, and returned terrific gas mileage.

The assembled-in-Canada RX400 has been on American roads for a year or so and every indication is that it will be just as reliable as its forebears.

Then there's the menu interface in a binnancle at the center top the RX400's dashboard, which includes a sophisticated GPS system with memory, detailed schematics of what the hybrid system is doing, a rear camera that is activated when the driver shifts into reverse, and menus for audio, climate control, and so on.

At first, the interface seemed overwhelming and required taking my eyes off the road. But then a funny thing happened. As quickly as you can say "premium unleaded gasoline," which the RX400 unfortunately requires (the RX300 runs on regular unleaded), I got the hang of the system and was tooling along just fine while briefly taking one eye off of the road to change radio stations or glance at the GPS.

The technology in some high-end cars these days (notably the notorious BMW iDrive system) can be overwhelming, but this Lexus was engineered with the driver in mind, not despite the driver.

I trace the beginning of GM’s downturn from a leading automotive innovator to the maker of boring rental cars back to 1976 when a peppy little import called the Honda Accord first arrived in the
The 1976 Accord had just everything that the GM cars of that era didn’t.

It was attractive in a cute sort of way. It was larger on the inside than it appeared from the outside, not the other way around. It had a rear hatch that opened to a collapsible back seat, offering lots of storage space. It handled well, had some oomph and was economical, which was no small thing arriving as it did between the two 1970s oil crises. A practical friend who had owned GM cars forever bought a silver '76 Accord and was hooked. I drove it and was hooked, too.

GM’s response to the Accord and successive waves of hot selling offerings from Honda and later and Nissan (nee Datsun) was to continue churning out formulaically unattractive and uneconomical cars of dubious quality. In fact, GM’s only direct response to the first wave of the so-called Japanese Invasion was an abomination called the Chevette.

The General’s fortunes briefly improved after Rick Wagoner took over in 1992 and GM's share price soared to a record $90. But beneath the gloss the same fundamental problems persisted, eating into the huge corporation like rust spreading through the underbody of an old Cadillac Coupe de Ville.

But the biggest problem was that Wagoner’s GM was coasting along with that same tired product line as much of the rest of the automotive world was stealing a march on it with attractive and innovative products.

The question was not whether would become top dog, but when. And hindsight being what it is, it’s easy now to see that Wagoner was the wrong choice to turn GM around. Wall Street knows that. The car dudes who write for Motor Trend and Automobile know that. Consumers know that. Wagoner and the GM board just happen to be the last people to know that.

These trends include minivans, smaller SUVs (Wagoner bought the Hummer brand just as the mega-SUV bubble was bursting) and an increased environmental awareness. GM has been ridiculously slow to embrace now popular gas-electric hybrid vehicles. It has no hybrids in showrooms today, while Toyota-Lexus has 12 models and soon will have 20.

GM has survived because it still makes a heck of a lot of cars -- and trucks. It just doesn’t make money. (Its ossified dealer network is in even worse shape than the mother ship, but that's another story.)At this point, it's not a matter of General Motors emerging from its long self-inflicted nightmare smaller and leaner. It's a matter of surviving.

As big a cheerleader as I am for Toyota-Lexus, every American should care about GM’s dire straits. Because GM is still so large and draws from so many suppliers, it’s aches and pains reverberate throughout the economy.

By the way, GM's share price closed at $30 and change yesterday.
Posted by Shaun Mullen at 4:44 AM
Email ThisBlogThis!Share to TwitterShare to FacebookShare to Pinterest

Beside Toyota, I also love Nissan. It’s fast moving in the market. If the Toyota has its powerful fuel pump, Nissan also does have its indispensable. Nissan Fuel Pumps. No wonder both of them are performing very well in the automotive world.

From an environmental perspective, it makes more sense to improve the fuel economy of the biggest gas-guzzlers instead of already efficient economy cars. For example, if a car gets 35 MPG, then a 25% improvement would yield 44 MPG. These numbers are close to what the Saab hybrid and non-hybrid models get that uses Saab oxygen sensor. If you drive both 15K miles, the hybrid uses 86 less gallons of fuel... Which is really good for a hybrid car...

Hybrids save roughly 30% on fuel costs and cut down 30% on emissions.