Is That A Light At the End of the Tunnel? 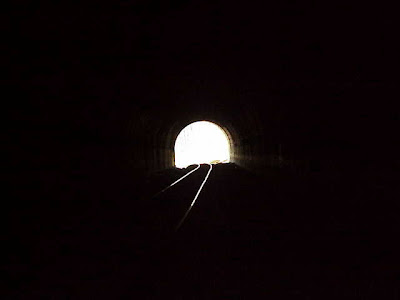 The fact that the war has now slouched into its fifth year with no end in sight is all you need to know about how well it is going. Recall also that George Bush declared “Mission Accomplished” in May 2003 and his handlers boasted that the American liberators would be home by Christmas.

They thought they knew which Christmas that would be, but they didn’t. And still don’t.

Yet believes that the Mess in Mesopotamia must end sooner rather than later, I find myself in the unusual position of seeing a faint glimmer of light at the end of the tunnel.

* Congressional Democrats, with an assist from a small but growing number of Republicans, finally have figured out how to harness that mid-term election mandate and are no longer cowed by the president's imprecations that they are "undercutting" the troops by trying to end the war.

That would be by setting a funding-dependent timetable for getting the hell out of with the support of a majority of American who see through the White House's flag waving.

Yes, Bush will veto every bill that reaches his desk that has such a provision. But the upshot will be to paint a wounded president even further into an already tight corner because he is unable to articulate an alternative to the congressional initiatives other than the tired blah-blah about staying the course and tired assertions that people who do not support staying the course are unpatriotic.

Iraq has become Bush's Forever War, and he is well along a most cowardly course – to bump through his last 16 months in office and then dump his mess into the lap of the next president.

* A not insignificant number of Republicans are well aware that the president stands between them and their political survival, and survival is their top priority, not saving the "soul" of their party, trying to bolster the president's battered legacy, or any other high fallutin purpose.

In an orchestrated series of leaks, some Senate Republicans are said to be setting a timetable of their own: They’ll withdraw their support for the war in August unless there is indeed "real progress," and apparently have told General David Petraeus, the top commander in , as much.

Why August? I dunno. Maybe it’s as simple as Congress reconvening in September after its summer recess and the 2008 congressional campaign shifting into a higher gear.

Or maybe it's just that they too are finally willing to contemplate drawing a line in the sand, something that George Bush remains adamantly opposed to doing in the face of a surge that is not likely to succeed by this August or next, as well as a deeply courrupt and Shiite-coddling Iraqi government that continues to thumb its nose at Washington and the American troops bogged down in its midst.

Political columnist Dick Polman got it exactly right at his American Debate:

It’s time yet again to fact-check President Bush. This has become one of life’s more onerous but necessary chores - the journalistic equivalent of chopping ice or cleaning the cat box – and I’d frankly prefer to focus on something else. But no. I’d be remiss if I failed to address Bush’s fact-defying remarks yesterday in the Rose Garden.

So much of what he said about Iraq and the Democrats was so far removed from empirical reality that I am tempted to recall what the writer Mary McCarthy once said about her contemporary Lillian Hellman: "Every word she writes is a lie, including and and the." With respect to the president, that’s probably too harsh. He did, after all, start by saying "good morning," and it was indeed a nice morning. He also vowed again to veto any congressional bill that includes a U.S. troop withdrawal timeline, and we can probably believe that, too.

It’s the other assertions that seemed problematic. To be charitable, let's just say that he repeatedly engaged in highly selective semi-truthiness. . . .

Bush still seems unwilling to acknowledge that he is out of sync with prevailing American sentiment. . . . And speaking of public opinion, consider this remark, uttered yesterday: "You are not having a success in the hearts and minds of Iraq. There’s simply too many killers there, too many factions that don’t want democracy. And I’m not sure, no matter what surge you have, that you can overcome the Iraqi people not cooperating."

A hostile reporter berating Bush? A Senate Democrat pleading for a U.S. surrender?

No, that was Bill O'Reilly.


The victims came from the market visited the previous day by presidential wannabe John McCain, who said that an American security plan in the capital was starting to show signs of progress after a widely ridiculed walked through the market during which he was accompanied by 100 heavily armed troops as five helicopters flew overhead.

More here.
Posted by Shaun Mullen at 5:29 AM
Email ThisBlogThis!Share to TwitterShare to FacebookShare to Pinterest

Shaun says: 'SENATOR McCAIN, YOUR GROCERIES ARE READY'
Now that's what I call snark with a kick to it.