Putting George Bush on the Couch 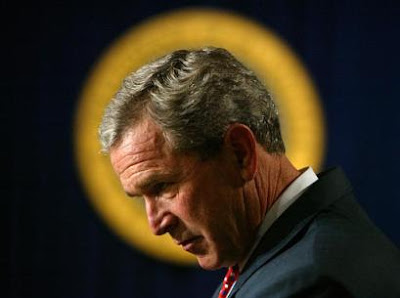 Tim F. posed an interesting question the other day: What the heck is wrong with George Bush?

That question may be answered in the future when psycho-historians plumb the depths of a man whose personal flaws, combined with the myriad blunders of his hubristic neocon brain trust, in a train wreck of a presidency.

But it’s worth taking a crack at the question now since we're stuck with the dude for another 20 months.

So what the heck is wrong with Geore Bush?

Is it his profound lack of intellectual curiosity?

Is it his demand that people be loyal to him even if it means making bad matters worse?

Is it a messiah complex growing out of his belief that he channels the wisdom of Jesus?

Is he overcompensating because he may think that he has failed to live up to his father’s expectations?

I am well out of my depth here, so whuddya think?


* * * * *
A cross post of this over at The Moderate Voice is generating some interesting comments. Click here to read them. You're welcome to join in.

Posted by Shaun Mullen at 5:08 AM
Email ThisBlogThis!Share to TwitterShare to FacebookShare to Pinterest

The Fall of Fujimori is a good documentary on a "president" turned dictator. Bush is just another dictator and he's made remarkable progress in America, considering that we're supposed to be some kind of a republic or whatever where you're not really supposed to have a dictator running the country.

Fujimori used the word "terrorism" almost as much as Bush, but Fujimori had the Shining Path and Tupac Amaru and there were roughly 35,000 victims. Bush has to have his boys work very hard to dig up a handful of terrorists in this country and he is compelled to constantly remind us of 9/11 and every other explosion that he can attribute to those who "hate our freedoms."

This isn't meant to minimize the threat of terrorism, I'm just saying that Bush is using the threat as one of his tools to attract a certain kind of American, the kind of American who likes to be told what to do and who is okay with having his/her civil rights removed to fight terrorism and preserve our freedoms.

Everyone wants to belong to some kind of family and Bush is offering something like a family. You just have to trust him and you should probably kill the prostitutes you consort with or they will come back to bite you on the ass.

Shaun, a good post. Here's what I think. Bush has an addictive personality. Most of his life he has failed in everything he touches and he gets bailed out by family and/or their friends. The latest attempt was the Iraq Study group and their recommendations to save Bush from himself. The problem here is that Cheney is his "Enabler" and so is willing to see Bush continue his losing streak, as he, Cheney, is delusional and psychotic. The country will be better off in 20 months when they are both gone.

I think we could have read the tea leaves better when Cheney selected himself as VP when he was in charge of the search. I never felt Bush had the smarts/intellect to make many of the decisions he made. It was Cheney who has been making the decisions all along.

But it replicated Bush's experience of failure and in that way Bush drove the country to bankruptcy just like his own oil business. He knows nothing else but failure so are we to expect any thing different? I think not. He never learned to take real accountability for his actions. He still has that lesson to master in this lifetime and he is at the preschool level in learning that lesson.