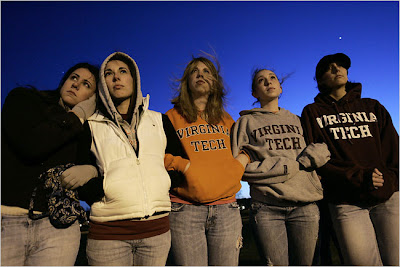 I caught some grief yesterday for my insta-post tying the Virginia Tech massacre to America's sick obsession with guns. Several folks accused me of trying to make political hay and one right-wing critic harrumphed that I had not even let the bodies get cold before piling on.


It turned out that this hypocritic was mightily stirring the pot at his own blog, but he had a point:

When a grossly public tragedy like a Columbine, a West Nickel Mines or a Virginia Tech occurs, there is a fine line between being respectful of the dead and taking advantage of them.

This was very much on my mind when I awoke this morning after a night's sleep punctuated by Hieronymus Bosch-choreographed dreams of a society awash in violence, fueled by pious hypocrisy, in the thrall of sex but ashamed of it, and led by the morally bankrupt. See what happens when you watch cable news all day?

That duly noted, allow me a couple of follow-up points to my previous screed and I'll be done piling on.


Speaking of hypocrisy and moral bankruptcy, the massacre was awful enough, but when I read that George Bush’s staff was talking to Virginia Tech officials about the president visiting the campus I didn’t know whether to throw up or throw something.

The Bush presidency, of course, has been infamous for soiling everything it touches with politics.

There was the Hurricane Katrina survivor who scraped together enough money to drive his pick-up truck all the way from Louisiana to the White House where he bumped into the president on the front lawn and told him what a great job he was doing. It turned out the “survivor” was a well-heeled businessman and Republican donor.

The "spontaneous meeting" had been a pre-arranged photo op, of course, and conjures up visions of the president kneeling with members of the Virginia Tech Rifle Club and praying that the state Legislature reconsider a bill to allow students to be armed on campus that died in committee last year.

I have a message for the president:

Not even this bloodbath is going to goose your abysmal approval ratings. Besides which, what have you done to reduce violence in this country – let alone the world – over the past six years?

Well, Bush wasn't listening because it was announced this morning that he and wife Laura will beruining . . . er, attending the convocation at Virginia Tech this afternoon.

That prompted this passionate plea from a Tech alumnus:

"I find your desire to attend the memorial service on Virginia Tech to be just another callous and manipulative act. Do these people suffering from an inexplicable tragedy the favor of staying in . You have nothing but empty sentiment to offer. However, to accommodate and protect your monstrous ego, security procedures will destroy the emotional sanctity of the memorial service. You know that, but you cannot resist the temptation to distract people from your failed foreign and domestic policies, not to mention the corruption threatening the survival of your terrible tenure as the president."

THE LESSON OF WEST NICKEL MINES
I felt literally and figuratively close to the five girls who were taken hostage and then gunned down by Charles Carl Roberts IV last October in a one-room Amish schoolhouse in . I live near the area, know it well and have a deep respect for the Amish and their way of life.

Roberts was said to be angry with God and himself and harbored some sort of grudge, but that he would prey on so gentle a people was beyond my comprehension.

Then Roberts' wife, Marie, appealed for prayers and forgiveness. She understood something about her Amish neighbors that is worth remembering in the wake of the Virginia Tech tragedy.

The Amish believe in a God that desires justice but shows mercy, two seemingly irreconcilable concepts in American society. And most importantly, they believe that forgiveness is the only way the cycle of violence can be broken.

I'm posting here because you provide no e-mail and I think Joe's place is not the venue for a flame war.

I'm sorry, honestly, for being intemperate and I won't qualify that, in today's usual manner, by saying, "Sorry, if YOU took my comments the wrong way."

I did, however, wait twenty-four hours. Then got my Irish up. But "meds" and "hate speech" are exceedingly unfair, and way beyond ad hominem, in comparison. I did not conjure up any scenario to peer into W's or your heart. You wrote what you wrote.

As I wrote yesterday: "Evil is neutral as to category...Prayers for VT. Prayers for the country."

I'd add: Prayers for the victims, their families, you, me, and the gunman. Do you remember Father Zosima and the "Little Onion," from Karamazov?

I had not even let the bodies get cold before piling on.

Does the commenter mean like how the administration politicized the incident with there very first statement of the day (from the Deputy Press Secretary)? Or perhaps as John McCain did mid-afternoon with his dragging the 2nd Amendment into the discussion. Talk about not letting the bodies get cold.