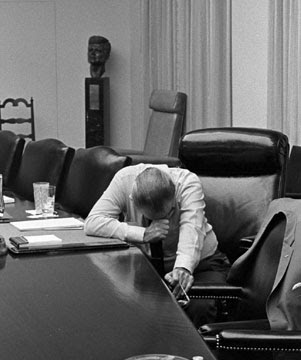 Lyndon Johnson had lost it all, and so had the rest of them; they had, for all their brilliance and hubris and sense of themselves, been unwilling to look to and learn from the past. . . . He and the men around him wanted to be defined as being strong and tough; but strength and toughness and courage were exterior qualities which would be demonstrated by going to a clean and hopefully antiseptic war with a small nation, rather than the interior and more lonely kind of strength and courage of telling the truth to America (about an unwinnable war) and perhaps incurring a great deal of domestic political risk . . .

Nor had they, leaders of a democracy, bothered to involve the people of their country in the course they had chosen; they knew the right path and they knew how much could be revealed, step by step along the way. They had manipulated the public, the Congress, and the press from the start, told half truths, about why we were going in, how deeply we were going in, how much we were spending, and how long we were in for. When their predictions turned out to be hopefully inaccurate, and when the public and the Congress, annoyed at being manipulated, soured on the war, then the architects had been aggrieved. They had turned on those very symbols of the democratic society they had once manipulated, criticizing them for their lack of fiber, stamina, and lack of belief. . . . What was singularly missing . . . was an iota of public admission that they had miscalculated. The faults, it seemed, were not theirs, the fault was with this country which was not worth of them. So they lost it all.

Not since the days of Watergate, when our judicial system and intelligence community were deployed by the White House in the service of partisan politics, have we seen such abuses. And in many ways, what we have seen from this administration is far more extensive than that scandal.

Partisan politics has infiltrated every level of our federal government – from scientific reports on global warming to emergency management services to the prosecutorial power of the federal government itself. Even the Iraq War – from our entry to the reconstruction – has been thoroughly politicized and manipulated.

You know it's bad news for the White House when agencies you'd never even heard of start launching investigations into the administration.

This time, it's the Office of Special Counsel, a federal investigative unit that's charged with monitoring federal employees, not to be confused with a special counsel or special prosecutor such as Patrick Fitzgerald. The OSC is charged with policing Hatch Act violations and protecting whistleblowers, among other duties. It's a permanent federal agency, and its prosecutions are not criminal prosecutions.

But the OSC does have teeth. If it successfully prosecutes a federal employee before the Merit Systems Protection Board (which acts as its judge), then that employee can be terminated. That employee, in this instance, is Karl Rove.

The construction of barriers and checkpoints that turn Baghdad neighborhoods into what U.S. officers sardonically call "gated communities" is another sign -- as if more evidence were needed -- that Bush's "surge" is nothing more than a maneuver to buy time. His open-ended commitment for U.S. forces to patrol those barriers and guard those checkpoints will become the next president's problem.

The military is so strapped for personnel that it's sending its space teams to train Iraqi security forces. Talk about eating the seed corn.

Pat Tillman’s death in Afghanistan has gone from being tragic to suspicious to scandalous.

Summer approaches in , and the temperatures will start rising dramatically. So will police interventions to ensure proper shari'a wear for women. The Iranian government announced that, as they do every year, they will start cracking down on women who react rationally to the heat by not wearing a head-to-toe sack.

There is no link between abortion and breast cancer, a 10-year study shows.

Students of Turner County High School started what they hope will become a new tradition: Black and white students attended the prom together for the first time on Saturday.

In previous years, parents had organized private, segregated dances for students of the school in rural , 160 miles south of .

Walt Disney Co.’s 1946 film "Song of the South" was historic. It was Disney’s first big live-action picture and produced one of the company’s most famous songs — the Oscar-winning "Zip-a-Dee-Doo-Dah." It also provided the inspiration for the rides at Disney’s theme parks.

But the movie remains hidden in the Disney archives — never released on video in the and criticized as racist for its depiction of Southern plantation blacks.

has agreed to admit FDA investigators to pursue the contamination of pet food that has sickened thousands of pets and killed who knows how many.

sold more cars and trucks around the world in the first three months of 2007 than any other manufacturer and surpassed General Motors for the first time, ending one of the longest runs of dominance in all of global industry and marking another milestone in ’s long decline from unchallenged industrial preeminence.