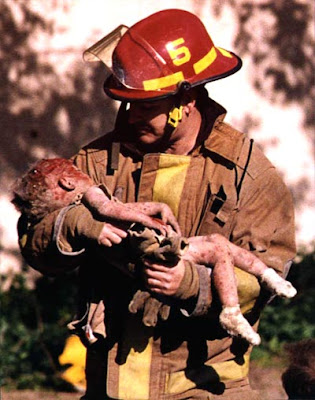 The bomb attack on the federal building in Oklahoma City 12 years ago today ushered America into the modern age of terrorism. But for me it was a professional nadir and resulted in a cautionary tale worth telling and retelling.

I was covering the O.J. Simpson criminal trial full time when a rental truck loaded with more than two tons of ammonium nitrate and fuel oil was detonated by anti-government militia sympathizer Timothy McVeigh at the foot of the Alfred P. Murrah Federal Building. Some 168 people were killed, including little Baylee Almon (see photo) and 14 other children in a day care center in the building.

I was pulled off of The Trial of the Century and tasked with writing my newspaper’s main story on the bombing while our reporter and photographer were still in the air en route to the scene of the tragedy.

The Internet was in its infancy and blogging was a few years off, and so I hastily assembled my story based on wire service reports and other information I was able to glean as I raced against an early deadline for our paper and the national wires. I came upon a reference to Oklahoma City having a largish Muslim community and the fact that was a source of some friction.

Desperately needing the WHO piece of the WHO, WHAT, WHERE, WHY and HOW that every news story should include, I mentioned that Muslim population in the fifth paragraph, not so high in the story as to give it too much importance, but not so low that it would get lost. My implication was unmistakable: The bombing might have been a terrorist act stemming from members of that community.

How utterly wrong I was, so wrong that I sometimes use this egregious lapse in judgment as a talking point -- one that is even more relevant today in this age of rampant racial stereotyping -- when I speak to university journalism classes.

I set up the students by distributing photocopies of my story and then ask them to point out a major error in it.

I have yet to find one student who is able to do so.

Posted by Shaun Mullen at 7:27 AM
Email ThisBlogThis!Share to TwitterShare to FacebookShare to Pinterest

Wow. I think that's very brave of you to recognize and admit your 'error.' From the Muslim community in America, which has been targeted too many times, thanks for being a journalist with integrity.