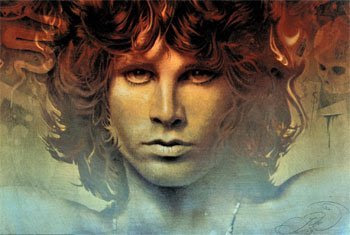 Hey, I don’t even live in , but Governor Charlie Crist just got my vote because he is considering pardoning rock music bad boy Jim Morrison for 1970 indecent exposure and profanity convictions.

"He died when he was 27. That's really a kid, when you think about it, and obviously he was having some challenges. There's some dispute about how solid the case was."

In fact, the case was anything but solid.

Morrison was arrested the year before after allegedly exposing himself on the stage at a Doors concert in . There is no question that the band leader was drunk, but he denied exposing himself and none of the photos entered into evidence showed Morrison’s genitals.

"He taunted the audience. 'I'm going to show you! I'm going to show it to you!' Then he took his shirt off, held it in front of him like a bullfighter's cape, wiggled it around as if there was something going on behind it."

Morrison appealed the convictions, but was found dead in July 1971 in a bathtub before it could be heard.

"Trying to clear his name and then he dies. If you have a heart pounding in your chest, that has to tug at you a little bit. It should. To have that much talent and to have it sucked out, even if there was some self-involvement . . . that's very sad and very tragic."

Crist said he has his legal team reviewing the case and determining the procedure for granting a pardon.

Ken Lay, of Enron fame, died before his appeals had been heard which nullified the twenty five million dollar judgment for fraud which he owed.
In effect this sleight-of-financial-wizardry tutti de capo croaked and took it ($25m) with him.
Would that his ethically challenged buddies, Bush and Cheney, had made him Secretary of the Treasury. He could have hidden our debt to China and the GOPs' three trillion deficit from their six year reign in a Cheney expense account or NASA's budget or somewhere and presto: the dollar would be fifty percent higher, petroleum fifty percent cheaper and I could afford a European vacation like the good 'oil' days.
Thinking about money, ethics, Bush and the GOP, maybe we're all missing an obvious point. Instead of instituting impeachment proceedings against our two top ranking incompetents why not offer them plutonium parachutes (not the Russian kind).
It is not the (new) American way for CEOs to quit for for reasons of moral, financial or political ineptitude.
Offer them a billion dollars each to step down (and be prepared to go to two bil to close the deal and a hundred mil each for Alberto and each Cheney on the payroll.)
This is oligarchic morality.
Cheap at ten times the price!!