Why the Iraq Surge Already Is a Failure 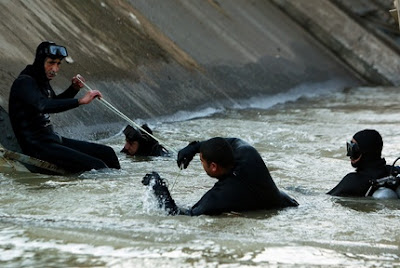 Divers search for victims after explosion on key Baghdad bridge
It has been a hugely embarrassing month for President Bush's last-gasp "surge" strategy.


It is not surprising that casualties are way up and that 13 days into April some 55 troops have been killed, a rate of death higher than any month since fell four years ago this week.

A spike in deaths was to be expected because of increased action in and elsewhere, so we can put that unpleasant reality aside and move on to two hugely symbolic events on Thursday that should not have happened if the surge was working:

* The death of a Sunni member of Parliament (lowered from eight deaths originally reported) from a suicide bomb attack just a few feet from the main chamber of the Iraqi Parliament. Twenty two people were wounded, including 11 members of Parliament.

Parliament reconvened today to condemn the attack, which apparently was by an insurgent group with ties to Al Qaeda, but few members attended. (Desperate to squeeze even a drop of good news from the bad, some conservative bloggers remind us that there is an ongoing feud between Al Qaeda and an insurgent umbrella group. Bawaaaah!)

* The destruction by a tanker truck bomb of the heavily traveled across the Tigris, an oft photographed symbol of a that no longer exists except in the delusion minds of John McCain and his ilk. Six people died.

The grim reality is that despite the best efforts of U.S. commanders and their troops, continues to become less safe and the war has now reached into the heart of what was supposed to be the most secure place in the entire country – the hermetically sealed Green Zone.

No Americans were wounded in the attacks. Both appeared to have been indiscriminate, targeting Iraqis in general as a civil war unleashed by the botched occupation rages on.

In a sense, the occupiers have become a sideshow and the spike in American deaths is merely collateral damage in a larger drama that will continue despite the surge – and to an extent because of it.

There is collateral damage in , as well.

An isolated President Bush is yet again looking for a way to rescue failed military, political and reconstruction strategies that never have been in sync over the last four years because of his manifold leadership failures.

The latest solution is to find a high-level coordinator – in effect a war czar -- to see the surge through, but everyone approached to date has turned down the White House.

Grimmer still is the news that nearly half of the West Point class of 2001, the first class affected by the wars in and , are opting out of continuing to serve in the Army at the end of their required 5 years. The reason most often given is repeated tours in the war zones, a phenomenon similar to that seen at the end of the Vietnam War.

Bush has stretched the Army to the breaking point and now it is losing its best and brightest because of a failed presidency and a failed war.

Photograph by Wathiq Khuzaie/Getty Images
Posted by Shaun Mullen at 5:46 AM
Email ThisBlogThis!Share to TwitterShare to FacebookShare to Pinterest

Let me put this as succinctly as I can. We're screwed. All the years my family devoted to the military has gone for naught.

Keelhauling is too good for the perpetrators of the destruction of my country.