Another Blog Promise Shot to Hell 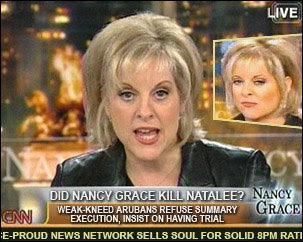 Back when I was a wee lad and decided to become a blogger, I vowed that I would never write about missing blonde bimbos and a right-wing crackpot by the name of Debbie Schlussel.

Well, in no time I broke my first vow and blogged up a storm about 18-year-old Natalee Holloway, who was not a right-wing crackpot but had gone missing after an alcohol-fueled sex romp while on a senior class trip to and by my reckoning had not been murdered but walked off a cliff or something and became shark chum. Whew!

Now it is time to break my second vow because of the latest outrage perpetrated by Schlussel, who is not a missing blonde bimbo, but wrote the following screed before the bodies of the Virginia Tech massacre vicstims were even cold:

The Chicago Tribune reports that massacre perpetrator, Cho Seung-Hui, died with the words "Ismail Ax" in red ink on one of his arms.

Hmmm . . . Ismail–the Arabic name for Ishmael–considered the father of all Arabs and a very important figure in Islam.

Maybe "Ismail Ax" is the name of a friend of his. Or maybe he wanted to remind himself to buy an Ax for his friend Ismail for next Ramadan. Or I’m sure we’ll hear some other similarly absurd "explanation." We’ll see.

Well, Debbie, we have seen, and your vileness is beyond the pale.