'What Part of Our Lives to Leave Behind?' 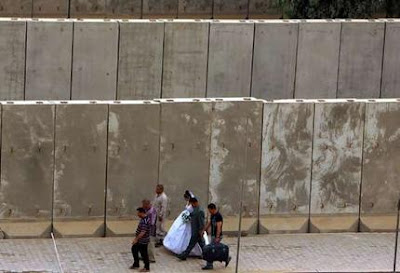 Riverbend was one of the first Iraqi bloggers and has been one of the most outspoken. She is fiercely proud of her Sunni heritage and fiercely unapologetic about her own views. Herewith excerpts from her latest (and for all I know her last) post:

The Wall is the latest effort to further break Iraqi society apart. Promoting and supporting civil war isn't enough, apparently- Iraqis have generally proven to be more tenacious and tolerant than their mullahs, ayatollahs, and leaders. It's time for to physically divide and conquer- like before the wall came down or today. This way, they can continue chasing Sunnis out of "Shia areas" and Shia out of "Sunni areas."
* * * * *
I remember before the war- one could live anywhere. We didn't know what our neighbors were- we didn't care. No one asked about religion or sect. No one bothered with what was considered a trivial topic: are you Sunni or Shia? You only asked something like that if you were uncouth and backward. Our lives revolve around it now. Our existence depends on hiding it or highlighting it- depending on the group of masked men who stop you or raid your home in the middle of the night.

On a personal note, we've finally decided to leave. I guess I've known we would be leaving for a while now. We discussed it as a family dozens of times. At first, someone would suggest it tentatively because, it was just a preposterous idea- leaving ones home and extended family- leaving ones country- and to what? To where?

* * * * *
So we've been busy. Busy trying to decide what part of our lives to leave behind. Which memories are dispensable? We, like many Iraqis, are not the classic refugees- the ones with only the clothes on their backs and no choice. We are choosing to leave because the other option is simply a continuation of what has been one long nightmare- stay and wait and try to survive. . . . It's difficult to decide which is more frightening- car bombs and militias, or having to leave everything you know and love, to some unspecified place for a future where nothing is certain.

I am both happy and sad about this. Happy that Riverbend is still alive and sad that she has to give up her home in order to have a life.

It almost makes me wish there was a judgment day.